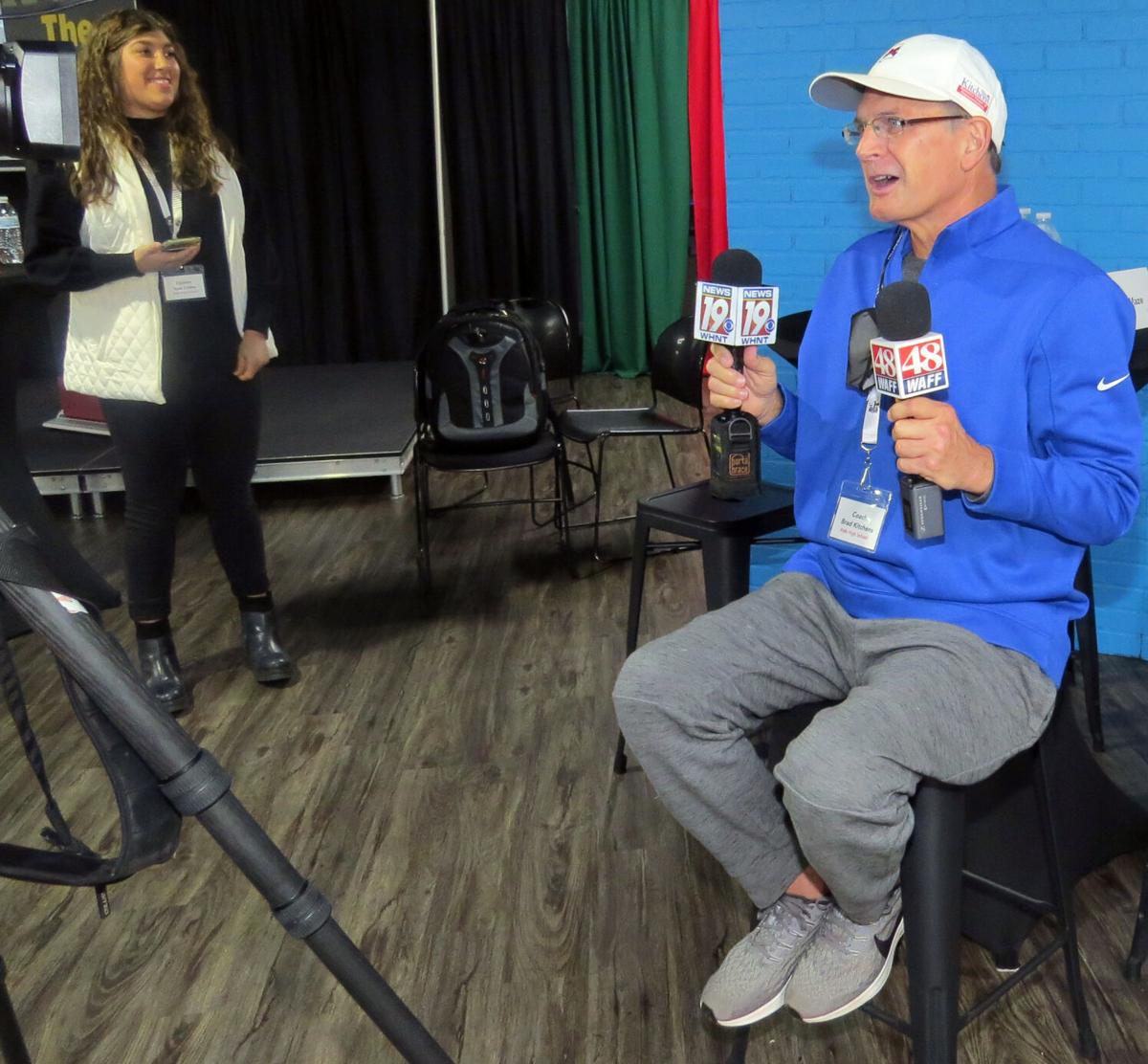 Brad Kitchens was popular with reporters as Kate Collins looks on. 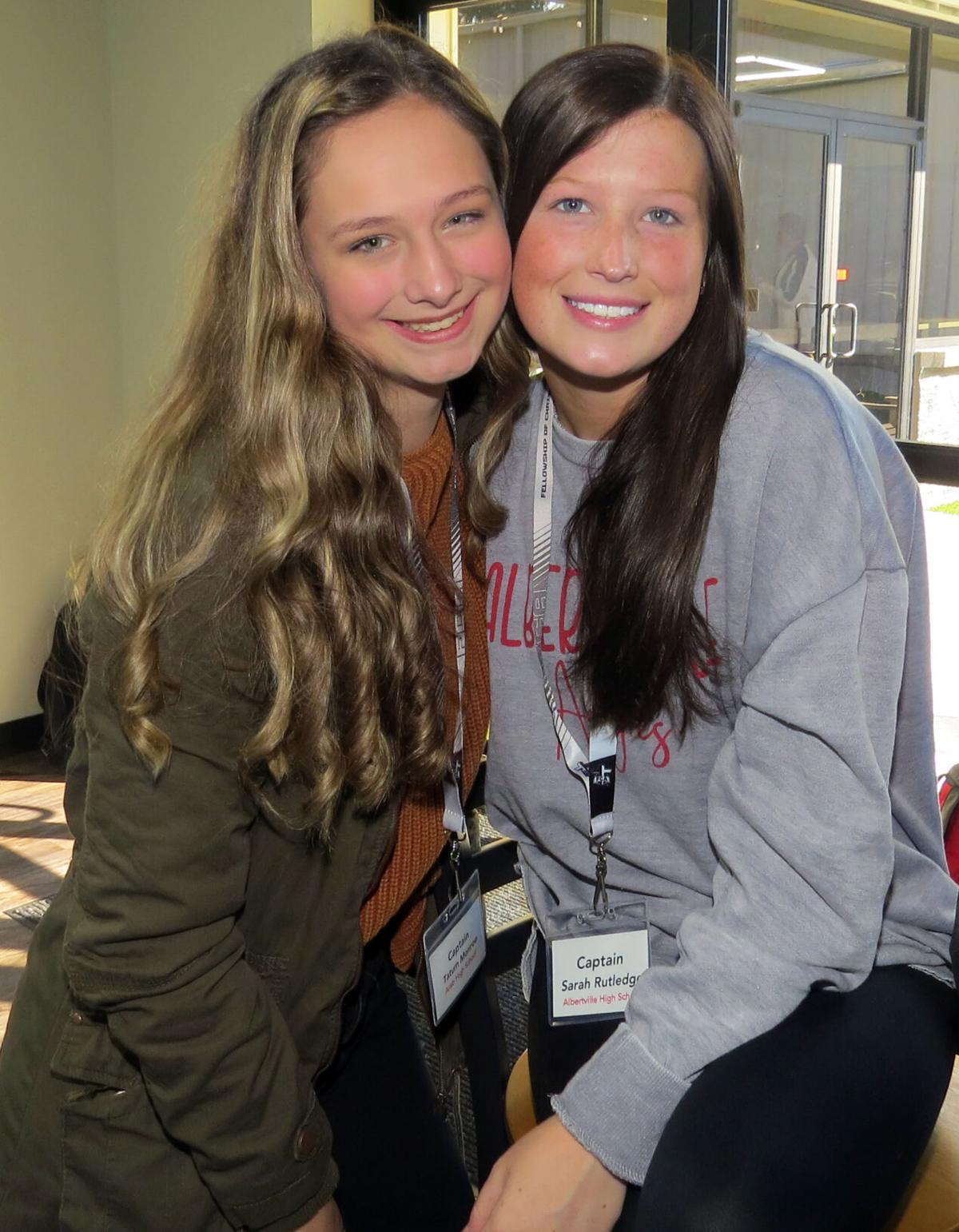 Tatum Monroe of Arab and Sarah Rutledge of Albertville renew their friendship at media opportunity on Tuesday. 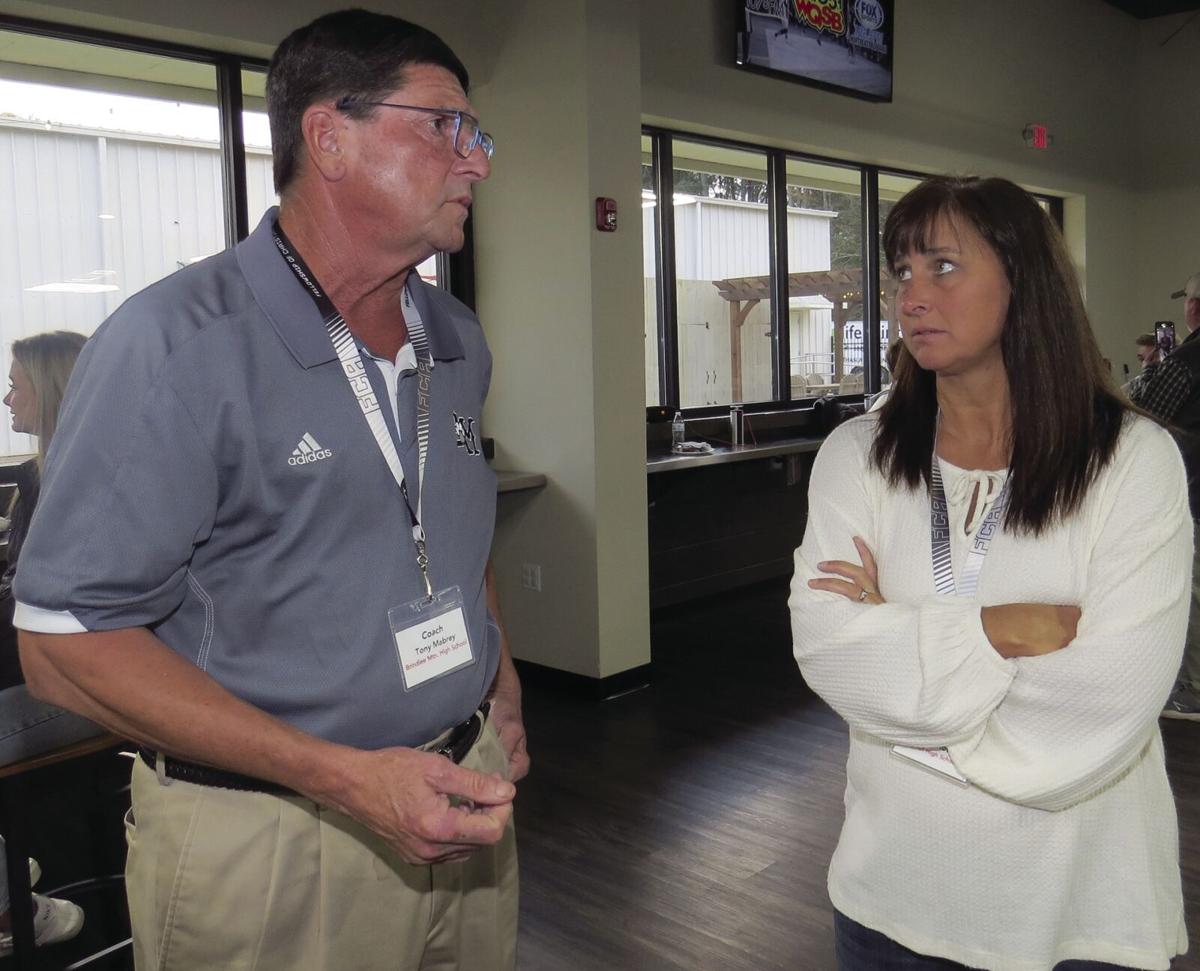 Brad Kitchens was popular with reporters as Kate Collins looks on.

Tatum Monroe of Arab and Sarah Rutledge of Albertville renew their friendship at media opportunity on Tuesday.

If another coach had a better time at the Marshall County Media Day for basketball on Tuesday than Brindlee Mountain’s Tony Mabrey, The Arab Tribune didn’t see him – or her.

Mabrey and two of his senior players – Chantzley Kirkland and Adri Knepper – were part of the first session of the event at Lifepoint Church in Albertville. The main sponsor was radio station Power 107.5.

Mabrey, entering his seventh season as the Lady Lions’ head coach, found it interesting what the younger coaches were talking about.

Asked about pressure to win with five seniors and at least three transfers coming into the program, Mabrey said, “We’re going to win this year or I’m getting rid of these two,” he said, referring to Kirkland and Knepper.

Finally, regarding the transfers, Mabrey said it will help his team run the press for longer stretches of the game.

“This is the most depth we’ve ever had,” Mabrey said. “That’s huge because we’ll be able to do some things like pressing. We’ve run the press, but we’ve had to back off when we get in foul trouble and get down to six or seven players.”

Then, pointing to Kirkland, Mabrey added: “We’ve got to keep her out of foul trouble. If a dog walked past this table right now, she’d probably foul it.”

Replied Kirkland: “I hate to admit it but I might.”

Other Lady Lion seniors include Kailyn Childress, Kyleigh Wilks and Kylie Westbrook, one of the transfers.

The Lady Lions open their season Nov. 12 at DAR.

New Arab boys coach Brandon Crews would benefit personally and professionally if Arab’s football team lost its playoff game against Homewood on Friday. But he’s already thinking positively about needing to postpone the scheduled opener next Friday if the Knights win Friday.

If Arab wins Friday in football, the Lady Knights’ game at Albertville also would be rescheduled. That would mean the home opener, against Boaz on Monday, Nov. 15, would become the season opener for both teams, even though the boys would be shorthanded.

Ed Johnson, the Knights’ quarterback, said it didn’t feel strange to be at a basketball event just days prior to playing one of the biggest football games of his career.

“No, sir, I like being here,” he said. “This is the first media day we’ve had in basketball.

“I’m excited about the football game Friday, but if something goes wrong, we’ve got basketball coming up and we’ll be ready for that.”

None of the football players have practiced basketball since the summer, but they have worked on their shooting and other skills during school some days, according to Wes Johnson.

Arab’s Reynoso played football for the first time this season and at 6-foot-4, he made for an interesting target at tight end. Reynoso hasn’t made a catch – at least not yet.

“I’m definitely out of basketball shape, for sure,” Scott said, laughing. “But it was fun to be back out there.”

Other seniors for the Lions are newcomer Nick Perkins, Andrew Byars and Will Compton.

The boys team will open its season at home against Sand Rock on Tuesday, then will play at DAR on Friday (Nov. 12).