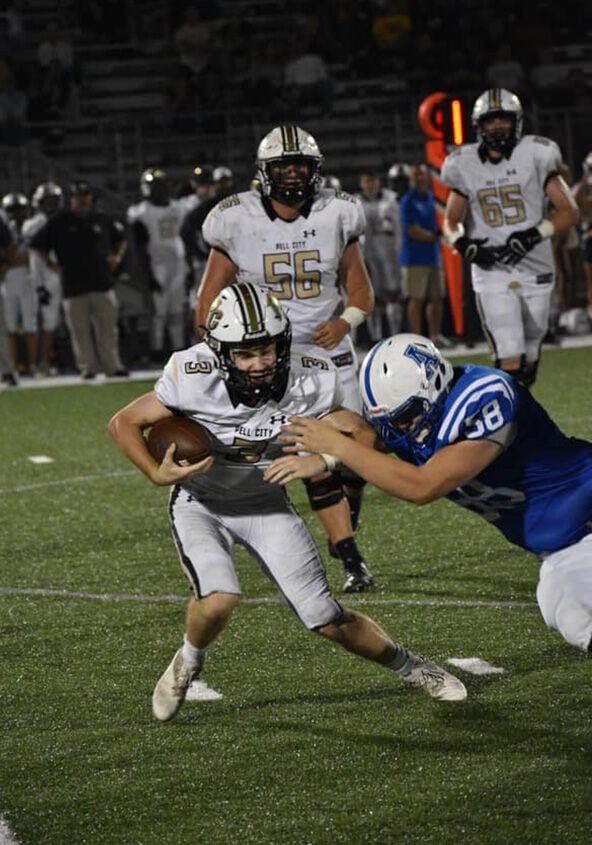 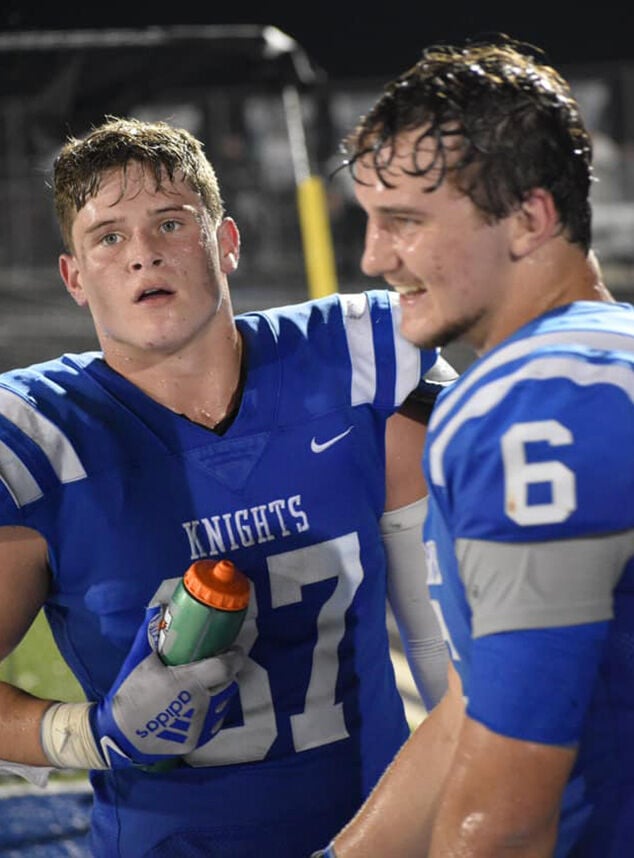 Arab defensive linemen Jonah Humphreys and Jonathan Pugh (6) take a break on the sidelines after a successful stand last Friday against Pell City.

Arab defensive linemen Jonah Humphreys and Jonathan Pugh (6) take a break on the sidelines after a successful stand last Friday against Pell City.

Arab coach Lee Ozmint wasn’t apologizing for an “ugly” win last Friday night against Pell City. Instead, he was empathizing with his players and coaches.

The week was tough on him, too, as was the game itself.

But it’s over now and the Knights have one game to win to do what was almost unthinkable two years ago.

And that is, win a region championship in 6A.

Arab took a big step toward winning a region championship for the first time since 1993 by defeating Pell City 17-6 Friday night.

Quarterback James Ed Johnson ran for 125 yards and one touchdown and passed for 94 yards and a TD as Arab improved to 5-1 overall and 4-0 in 6A, Region 7.

The Knights play at home against Oxford on Friday with a chance to clinch the title. Oxford is the defending Region 7 champion. With a win over Arab, Oxford would stay alive but would have region games left with Springville (Oct. 15) and Fort Payne (Oct. 22).

After an off week, Arab finishes region play against Springville. Arab doesn’t want to depend on help from another team should it lose Friday night to Oxford. The Knights want to continue this two-year odyssey on their own terms.

“We have put ourselves in position to win a championship,” Ozmint said.

The thought of such a game happening in his third season at Arab excited him the more he thought about it.

Ozmint had famously stood up at his first football banquet at Arab and declared that the Knights would not only compete in 6A but would “kick a 6A team’s (rear end) just like they would a 5A team.”

That same week, Arab had learned it had risen to 6A and into the defending state champion Oxford’s region. Fans understandably were doubtful.

Ozmint’s words gave them hope. Arab can finish that job against Oxford.

But the Knights needed a win over Pell City to get to that point. And Ozmint was concerned, not about the team’s preparation but about its mental approach to the game.

“We were not playing for a championship against Pell City,” Ozmint noted afterward. “Now we are.”

Not counting last year’s forfeit win, it was the first time Arab has defeated Pell City since 1927.

After Arab pressured Pell City’s punter into a safety with 6:57 left in the second quarter, the Knights took the ensuing kick and drove 60 yards in eight plays, with Johnson passing 19 yards to his twin brother John Wesson Johnson to put Arab up 9-0.

Ed Johnson ran 8 yards for a fourth quarter TD and passed to Dakota Nesmith for the two-point conversion.

No account of this game can go without mentioning senior linebacker Jacob Cobb. Remember the second quarter botched punt fors safety? It was Cobb who knocked the ball away from the Pell City punter.

Then, when Arab went up 9-0 on Wes Johnson’s circus TD catch in the end zone with 3:06 to play in the half, the Knights were called for an unsportsmanlike penalty and had to kick off from their own 25.

Pell City’s Kentrell Borden looked like he was going to make the Knights pay when he returned the kickoff from the 14 all the way to the other end of the field. Borden had broken free in Arab territory and was on his way to the end zone until Cobb caught him from behind at the Arab 11.

One play later, Jonah Humphreys intercepted a Smith pass and Arab was able to take the 9-0 lead into halftime.

“Cobb made a heckuva football play,” Ozmint said. “It was a big play for us.”

In the second half, Cobb made a key fumble recovery.

Ozmint thinks Arab’s best game is still ahead. He hopes to watch it Friday night.

“We’ve played well, but we haven’t put that one game together,” he said. “And when we do, it’s going to be fun to watch.”