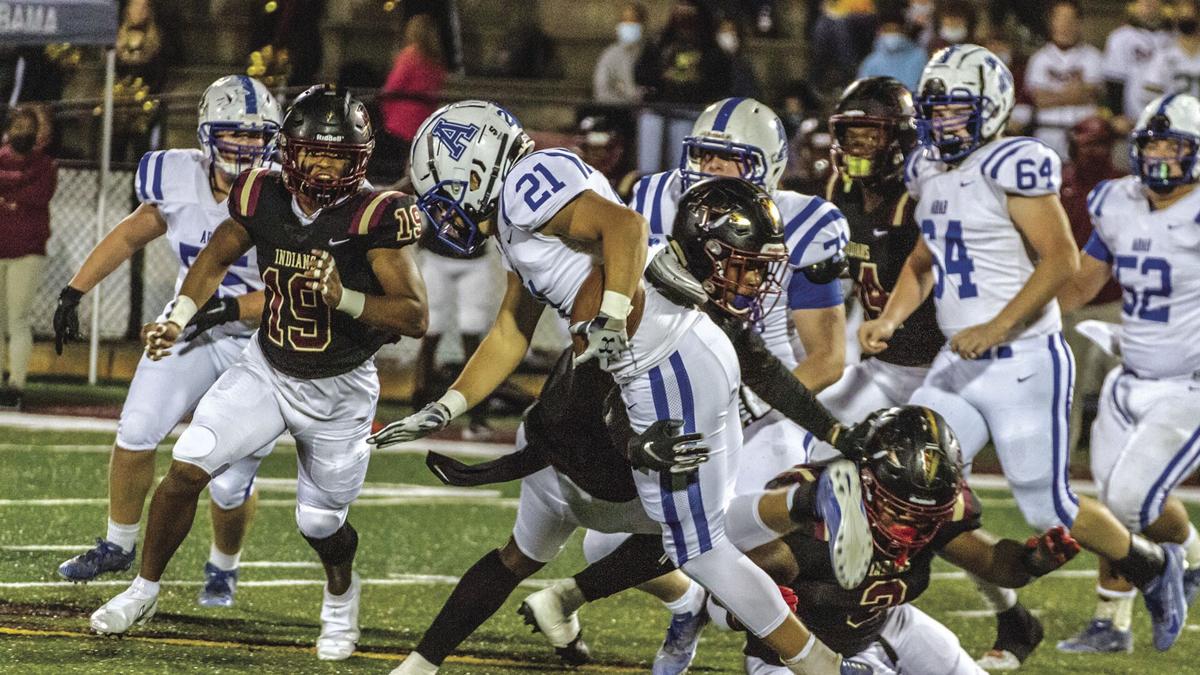 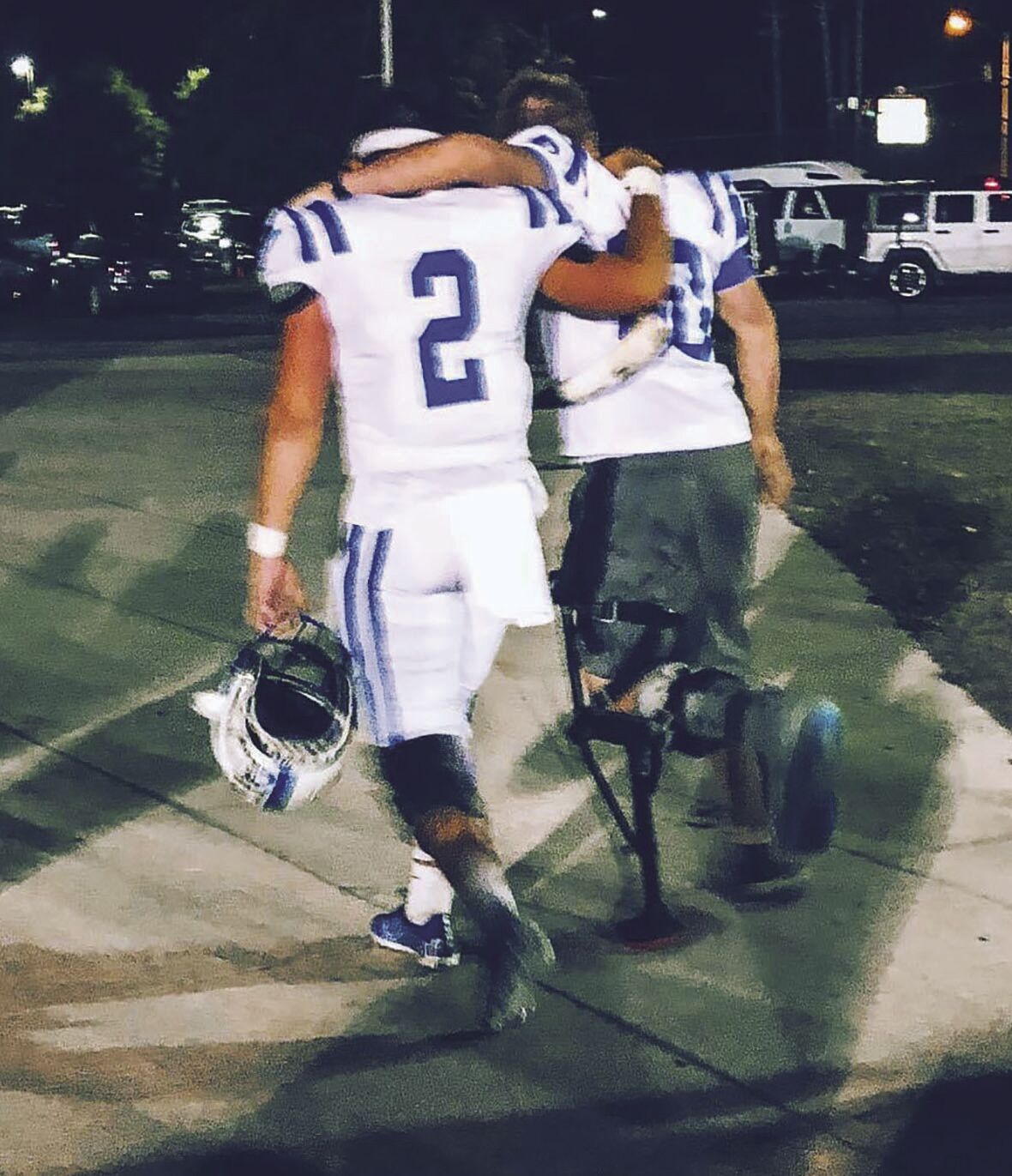 There was just too much Kool-Aid on the field for Arab’s liking last Friday night at Pinson Valley.

Kool-Aid McKinstry, real first name Ga’Quincy, hauled in five passes for 113 yards and three touchdowns and also had a dazzling 85-yard interception return for a score in a 45-0 win over the Knights in a first-round 6A playoff game at Willie Adams Stadium.

The recent Alabama commit is the state’s top 2021 football prospect, the No. 1-rated cornerback in the nation and the No. 24 player overall, according to the 247 composit rankings. He will play cornerback for the Tide but spent much of last season at receiver before playing both ways late in the year.

He’s already helped the Indians win two 6A state championships his sophomore and junior seasons. They lost 31-28 last year to eventual state champion Oxford in the semifinals, and appear to be on a collision course for a rematch with Oxford next week, this time in the quarterfinals.

On Friday, Pinson Valley plays at Shades Valley and No. 1 Oxford plays host to Briarwood Christian. The winners meet next Friday.

Shades Valley, despite its 4-7 record, gets to host Pinson Valley because it traveled in the first round and Pinson played at home.

Arab’s region, Region 7, didn’t fare much better than Region 8. Oxford whipped Minor 44-6, but the rest of the region teams lost by wide margins.

Those big losses helped Arab coach Lee Ozmint put his own team’s beat-down into some kind of perspective. The Knights made strides in their first season in 6A (since 2015) – and second season under Ozmint – but they’re going to have to work even harder to be more competitive, he said.

“We’ve got a lot of improving to do,” Ozmint said. “But you look around: A lot of teams in our region got their tales beat Friday night. Two of the four gave up 50 points or more.

“But we’ve got our own work cut out for us. I’m not satisfied at all. I’m still watching kids do their own thing at practice and in games. We’ve got to find kids who, not can do, but will do, the things we have to do to get better as a football team.

“We need to get those kids on the bus and invest in those guys, the ones who will commit to giving and doing what it takes from this point forward.”

To that end, all returning players went right back to the weightroom on Monday morning. They – at least the ones who are not playing other sports – will get working on a full-blown offseason program beginning today, Ozmint said.

He thinks what Arab players learned this season playing the likes of Oxford and Pinson Valley will push them to work even harder this offseason.

“And we’ve got to compete with them every day in the weightroom.”

Arab finished 5-6, 2-4 in region play, not where Ozmint hoped to be at the end of the season.

“But we’ve got a lot of key things in place,” he said. “The goal this year was to make the playoffs. The goal next next year will be to do something when we get there.”

There’s a lot for this Arab team to be proud of, Ozmint said, and he plans to talk with the seniors about that at the team’s banquet on Dec. 3 (see notebook item above).

“I talked to (the entire team) Friday night, but the season’s over now, so it’s hard to get (the seniors) together as a group,” Ozmint said. “I’m proud of what they accomplished.

“When the classification happened, there was a lot of doom and gloom about us competing in 6A.

“But our kids bought into what we were telling them and really took it upon themselves to compete at this level.

“We’re not there yet, but we’re a lot closer than we’ve ever been.”

Ozmint pointed to seniors Mathew Turnage and Christian Eaton as leading examples of leading the way with their play. Eaton in particular drew praise for what he accomplished his senior season.

“A year ago, I wasn’t sure about Christian,” Ozmint said. “At the time, he wasn’t coachable.

“But he’s really done his best to become a leader and he worked hard this season and it paid off.”

Ozmint hopes all the seniors take what they’ve learned playing football and use it to their advantage.

“It’s going to pay off down the road in life,” he said. “To learn, to get outside your feelings and do what’s right.

“Turnage fought through some pain. Cody Morgan did the same. I could go through every one of the seniors and say something similar. They learned some valuable lessons. Sometimes they had to learn them multiple times.

“I just hope they realize what they learned on the football field will pay off for them down the line as men. And I think they will.”