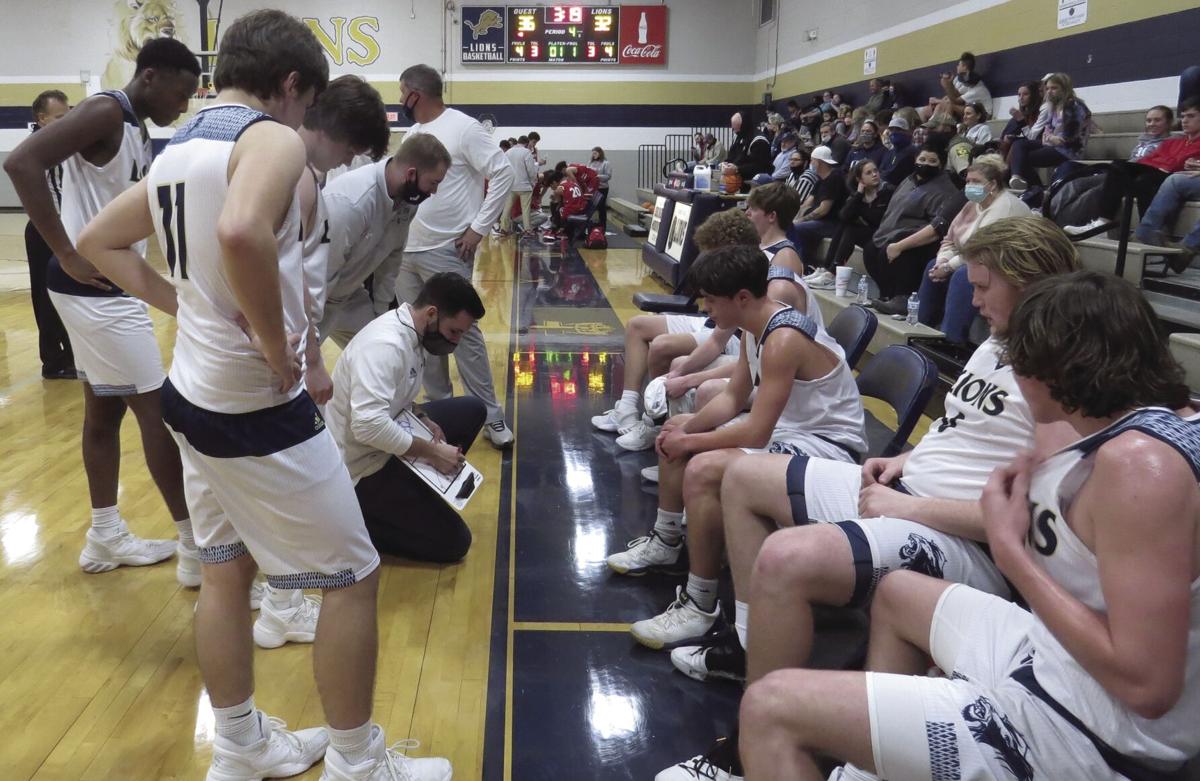 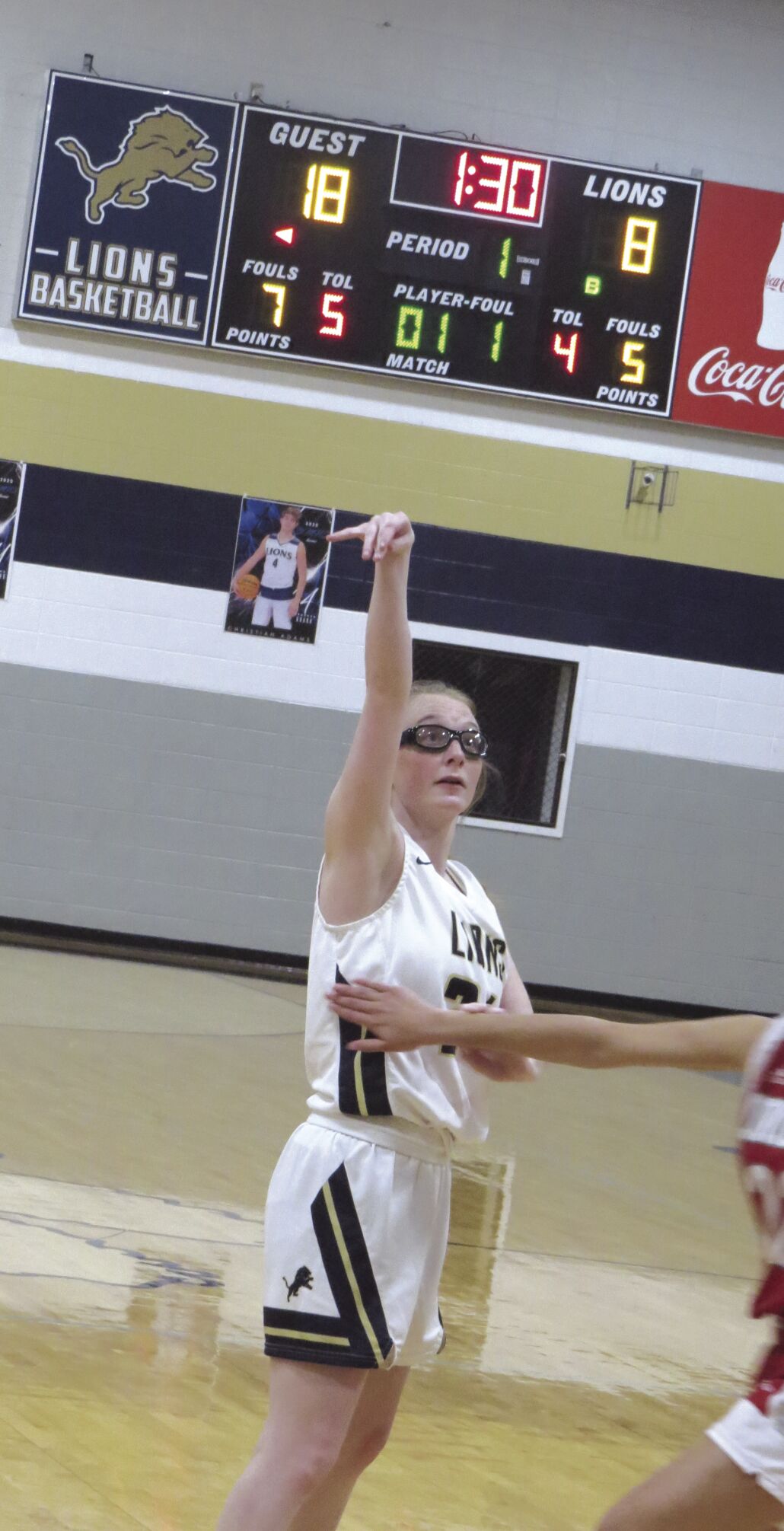 Zoie Decker hits a free throw for one of her team-high 14 points against Douglas Monday night.

Zoie Decker hits a free throw for one of her team-high 14 points against Douglas Monday night.

Douglas won all three games played but the bigger story might be that the games happened at all in this crazy COVID-19 season.

The Eagles and Lions were first scheduled to play at Brindlee Mountain on Nov. 20. The games were rescheduled – for pandemic-related reasons – for Dec. 1, but those games also had to be rescheduled, again for pandemic reasons.

In the meantime, with so much change in the air, the junior varsity girls team at Brindlee Mountain has essentially been absorbed into the varsity squad, which is why there were just three games Monday night.

With so few games under their belts, every contest played moving forward will be important, and that’s especially true for Brindlee Mountain’s teams.

But the varsity boys played more important games before and after the Douglas game. The previous Thursday (Dec. 31), the Lions went to J.B. Pennington to play their first Area 13 game of the season.

They won, 65-60. Two days earlier, the Lions had played their first game in five weeks, against Fairview.

Jefferson Christian was originally to be Tuesday’s opponent, but area games are being given precedent in scheduling make-ups.

“The (original) schedule, you might as well rip it up,” said Brindlee Mountain boys coach Seth Kelly. “We’re going to be playing three games a week the entire month (of January), and we’ve got to prioritize area games.”

Against Douglas, the varsity Lions were down 16-15 at the half. The Eagles stretched that lead to 11 during the third quarter but entering the fourth, they led 34-27.

Kelly’s crew made two furious comebacks in the fourth quarter, the first time pulling to within two points, 34-32, with just under four minutes to play.

The Eagles stretched that lead back out to eight (41-33) with 1:30 to play, then 3-pointers by Blake Westbrook and Andrew Byars made it 43-39. Byars’ 3 came with 34.8 seconds remaining, and after a Brindlee Mountain timeout, the Lions stole the ball under the Eagles’ basket but couldn’t convert.

Six straight free throws by Raygan Edmondson – all one-and-one opportunities, all during the final minute – helped seal the win for the Eagles. Strangely, the Eagles finished 7-of-12 from the line for the game.

“We’re getting there,” he said. “It came out in the little things, like running the floor and blocking out. That stuff’s still lacking.

“But it’s getting there.”

Westbrook and Byars both finished with 12 points, with all their points coming on 3-pointers. The Lions hit nine 3-pointers in the game, including three in the final period.

Christian Adams and Caleb Scott finished with six points each.

In the win over Pennington (the Lady Lions already had played the Lady Tigers), Byars led the way with 19 points, including 15 on five 3-pointers. Taylor King had 18 points and Christian Adams produced a double-double with 14 points and 10 rebounds.

“The big thing in that game was, we had been scoring inside very well up ’til then and we didn’t score inside that game, and we still found a way to win,” Kelly said.

Westbrook, Ian Garner and Will Compton scored three each.

Lady Lions coach Tony Mabrey, whose team came off a long layoff against Douglas, wasn’t happy with his team’s performance, which he acknowledged was a result of lack of practice and playing time.

Still, he pleaded with his team in the lockerroom afterward to start taking more advantage of practice time to get into better playing shape.

“We’re more talented than they are,” Mabrey said, referring to the Lady Eagles. “It was the first time we’ve played since Dec. 8 and we played like it.”

It also was just the Lady Lions’ fourth game of the season.

Mabrey placed some blame on his players for not using their time off to run or do something to try to stay in shape. He challenged them to do better moving forward.

“These are crazy times,” said Mabrey, who himself had to battle COVID-19. “So, I’m proud of them.”

With a hectic schedule the rest of the way – three games a week until the end of January – Mabrey sees a silver lining for his players.

“We’ll play more and practice less and that will be a good thing,” he said. “I think we can play ourselves into shape.”

Mabrey and girls JV coach Evan Lemons decided during the break to bring up three JV players to the varsity full time and end the JV girls’ season. With students not attending class, several players had limited access to transportation to the gym for practice.

“This should give us more depth,” Mabrey said. “Also, Adri Knepper is back. This (Douglas) is the first game she’s played, and I think she’s going to help us.

Knepper contributed five points against Douglas. Zoie Decker led the way with 14 points, Chantzley Kirkland added eight points and Kyleigh Wilks had five. Mooneyham and Kailyn Childress had two each and Addi Garmany and Natasha Williams had one apiece.

Senior Hallie Holmes scored 20 points in the first quarter alone, and didn’t even play the entire period as Susan Moore built a 29-2 lead after one.

Willams had four points and Wilks and Anna Claire Garmany each had three.

The JV boys were led by Gavin Daniel’s 15 points in the loss to Douglas. John Paul Taymon added seven points and Colton Hall had six.

Up next is another area matchup, Friday against Pennington, at home.

• George Stone contributed to this article.