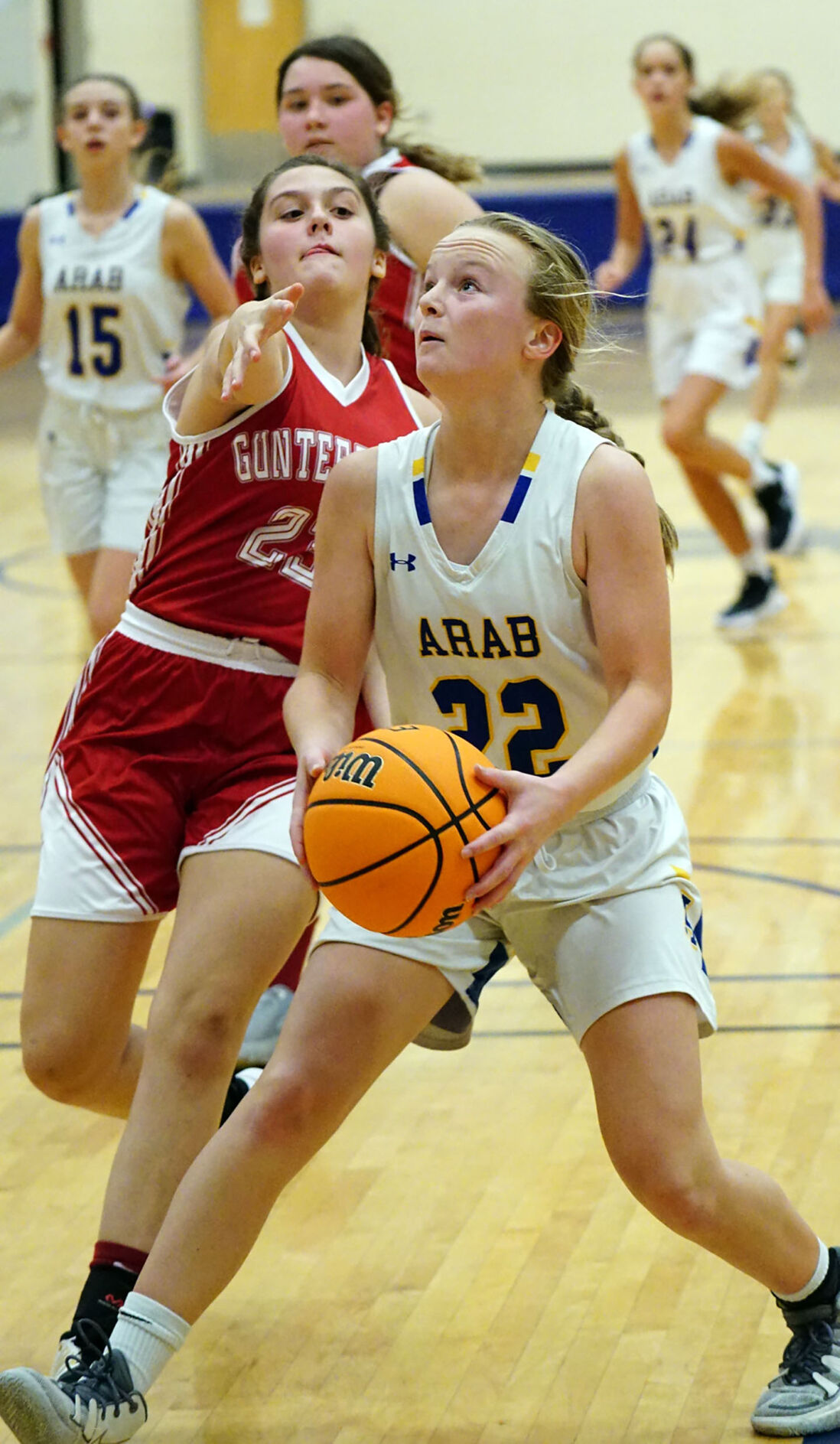 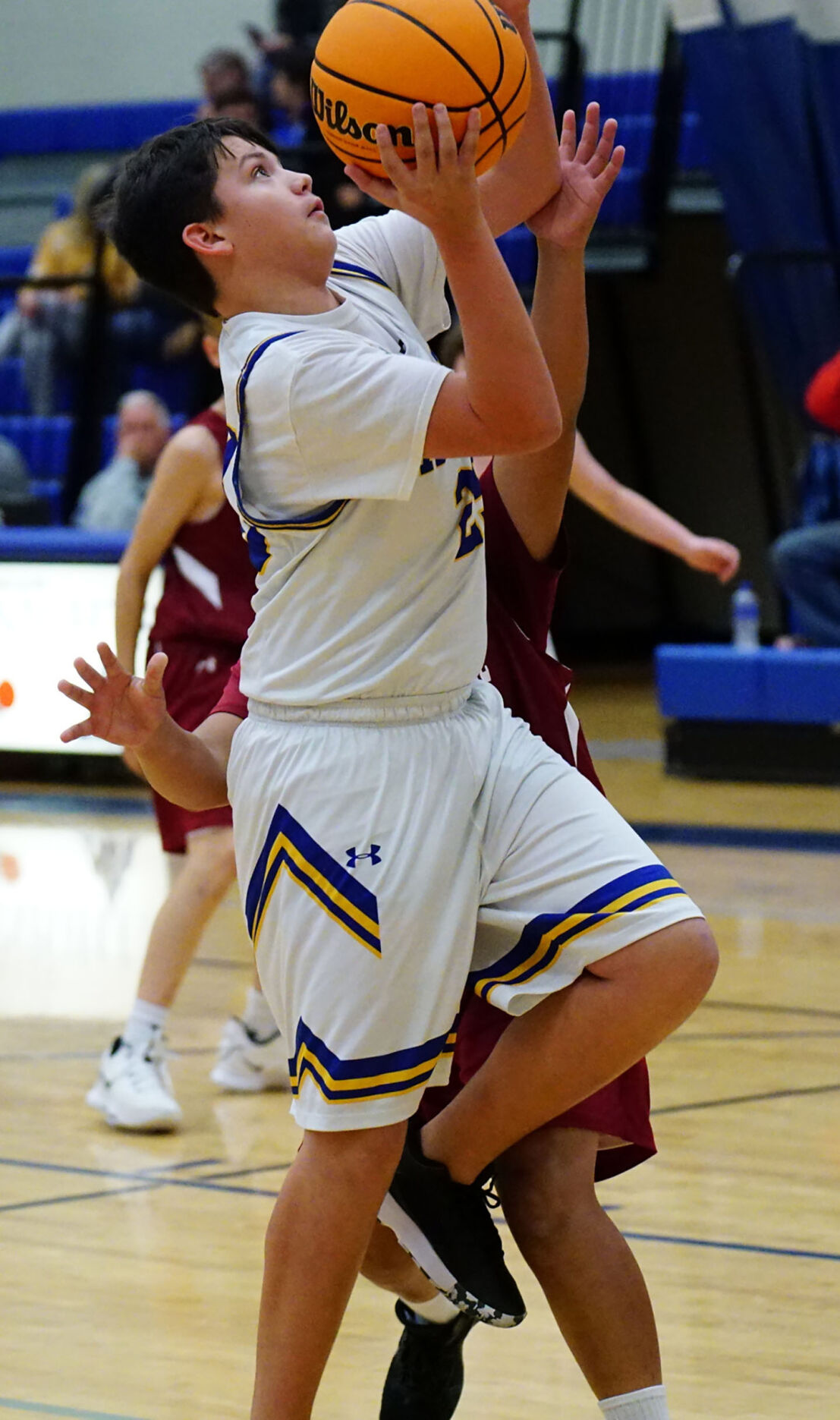 Arab seventh grader Chandler Moore scored 6 against Guntersville and had 5 against Madison Academy. 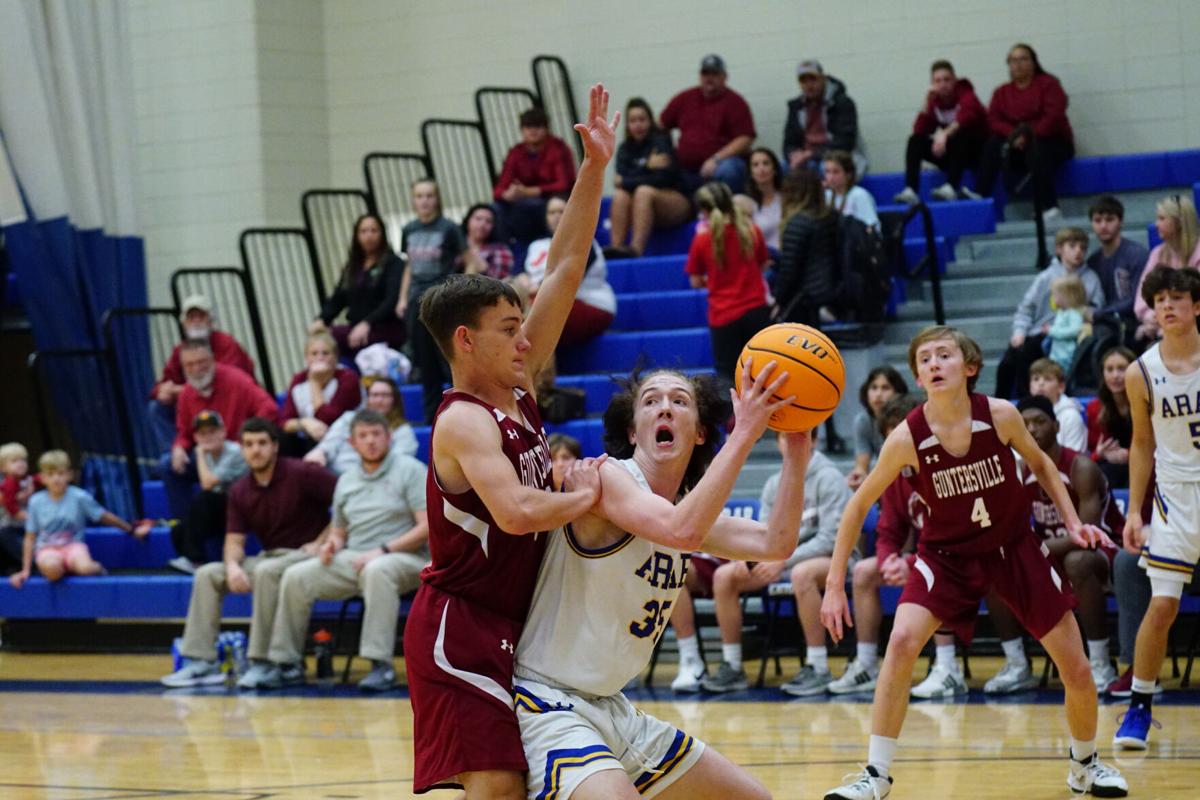 Eighth grader Brandon Morris (35) scored 10 against Guntersville and led the Knights with 12 against Madison Academy.

Arab seventh grader Chandler Moore scored 6 against Guntersville and had 5 against Madison Academy.

Eighth grader Brandon Morris (35) scored 10 against Guntersville and led the Knights with 12 against Madison Academy.

A four-game sweep by Cullman on Tuesday completed a busy and trying week for Arab Junior High’s basketball teams. They’ll now be off until three of the teams play at home Monday against Sardis (there will be no seventh grade game).

The Knights made a bit of a run early in the fourth quarter but couldn’t overcome a 14-point halftime deficit. Arab connected on 10 of 14 free throws but hit only 3 of 25 3-pointers.

“We had a long night at Madison Academy Monday and it seemed to carry over into tonight,” said coach Jason Guger. “We got off to a slow start and had to scrap our way back into it.

“You have to give the kids credit for trying to get back in and make it a manageable game. We just couldn’t make enough shots.”

The Bearcats were fundamentally sound and made 22 of 35 free throws.

“Cullman has a good team, no question about it,” Guger said. Zac Hallman led Arab with 11 points, Luke Martin had eight and Carter Kelly five.

Tied at 17 at the half, the Mustangs outscored the Knights by 10 in the third quarter.

“It was pretty much a defensive battle in the first half, and we felt good about our plan at halftime,” Guger said.

But, it was Madison Academy that came up big offensively, making two key 3-pointers to help the Mustangs pull away.

“You have to give them credit. They went on a 14-4 run in that quarter and we never really recovered,” Guger said. “Our kids played hard, they just had a tough time getting shots to fall.”

Strong inside play from the Wildcats proved to be the difference down the stretch, but the Knights didn’t help their cause much when given the opportunity. Arab connected on only 5 of 19 free throws.

But, the effort was there and the teams entered the final quarter tied at 24.

“We made it a four-quarter game but they made more plays than we did at the end,” Guger said.

Hallman led Arab with 13 points and Morris had 10.

“He gave us a good talk. He told us it was the early part of the season where you could either win or you could learn, and tonight we got a good lesson,” Guger said.

A running clock at the end of the game tells the story. The Knights were never in this one.

“Our defense really struggled tonight, in both games really, and the point total really shows it,” said Guger.

Bryson Trusley and Chase Miller had four points each for Arab.

The Knights played well in this one.

“Overall, it was a great night. Every single guy that went out on the court for us scored tonight,” said Guger.

“We played well defensively, too, so a good night for the seventh grade,” Guger said.

The Wildcats led practically all the way in this one.

“They had a good team with a couple of outstanding players we didn’t really have an answer for. Offensively. we put some points on the board but we couldn’t get enough stops,” said Guger.

Ty Babb and Moore had six points each for the Knights. Miller and Trusley had five each.

The injury and sickness depleted Lady Knights were down only by three, 10-7, in a low-scoring first half before the Bearcats pulled away. McKenna Tidmore, who went out of the game with an injury herself late in the game, led Arab with five points.

“The third quarter was especially tough,” said coach Donnie Weaver. “They wore us down with their press and took us out of our game. We made a lot of turnovers and gave them some easy baskets.”

The Mustangs led by only two, 16-14, at the half before limiting the Lady Knights to five second-half points.

“They played man to man and it became a struggle for us to run the offense,” said Weaver.

Arab was dealing with injuries and sickness as well headed into the game, forcing the coach to pull up a few seventh graders for the contest.

“We had four turned ankles in four straight days, and one of those was severe,” he said.

The closest game of the night left the Lady Knights with some encouragement but also a glaring need to get better in a critical area.

“Cullman had not played a close game all year,” Weaver said. “They had been blowing people out and our girls played very well tonight. It was an exciting game.”

But, the free throw line was a glaring problem spot for the coach.

“The tale of the tape was free throws. We only made 4 of 17 and that was the difference,” he said.

Lela Hipp had six points and Lackey five for the Lady Knights.

Arab led most of the game, but didn’t really pull away until late. The Lady Knights led 15-8 at the half and 19-15 after three quarters.

“It was a big bounce-back game for us after the loss Tuesday night,” Weaver said. “It was kind of a game of runs. We would go up five or six points and they would come back and score a few.

“But, in the fourth quarter we took advantage of some turnovers and made some shots.”

“Jill struggled a little when the season started but she’s been working hard on her shot,” said Weaver.

Lackey had six points and Hipp had four.

“Each of those three girls has been the leading scorer in our first four games, but I was excited tonight that seven girls scored for us,” Weaver said.