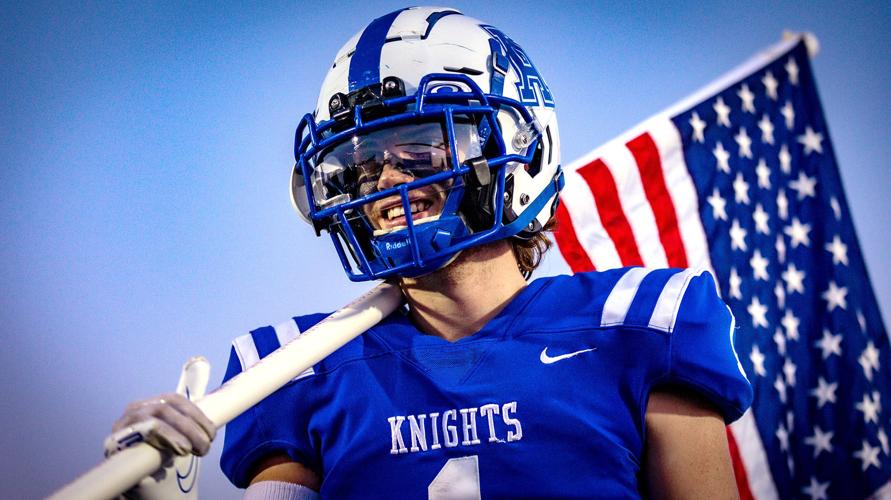 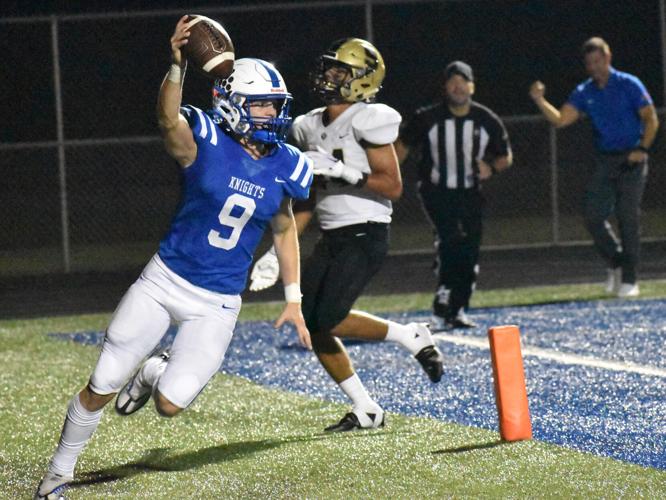 Certainly, quarterback Aidan Cox and wide receiver Brody McCain were on their game in a 28-7 win at home against Scottsboro last Friday.

Cox had another sensational game, completing 16-of-21 passes for 205 yards and two touchdowns. McCain had perhaps his best game of the season, catching 10 passes for 74 yards and one critical touchdown with 4.4 seconds before halftime.

It wasn’t just the number of receptions that impressed Cox and the coaches. Almost all his receptions were clutch.

“He finds a way to get open,” Cox said. “He gets open, I get it to him. We’re just out there playing our game.”

McCain’s TD reception just before halftime put Arab up 14-7 after the Knights fell behind 7-0 in the first quarter – the team’s first points allowed in the opening quarter all season.

Then, on the second play of the second half, Cox found wide receiver Spencer Strickland across the middle and Strickland outraced the defense for a 63-yard TD. Strickland finished with 130 receiving yards on five catches.

Arab heads into Friday night’s Homecoming game against 6A Fort Payne in great shape. At 5-0 overall, Arab is ranked No. 8 in 5A and is one win away from matching the best start of the season since the 1949 team won its first six games under coach Bemon Lyon.

The Knights also are closing in on a playoff berth, an effort that will resume next week with the first of two straight road 5A, Region 7 games (at Crossville, then at Boaz). Arab and Guntersville, which blitzed Boaz 62-14 last Friday, are tied atop the Region 7 standings at 3-0 with three region games left.

The teams will meet in Arab’s region finale on Oct. 14, at Arab. Guntersville will play its final region game the following week, at home vs. Sardis.

The game Friday night obviously is a non-region game but important nonetheless. It’s Homecoming, for one thing, and then there’s the unbeaten season. The Knights have a chance to match or even surpass the school’s only undefeated team: the 1944 Knights, who went 9-0 under Lyon, according to the Alabama High School Football Historical Society (AHSFHS.com).

For those attending Friday’s game, remember cash is now being accepted at the gate for admission. Also, debit cards and cash can be used at concession stands.

For those wishing to support the Arab High School Band Boosters, the annual Homecoming dinner is available for $10 at the auxiliary gym. It’s carry-out only and pick-up is from 4:30-6:30 p.m. Friday.

Arab coach Lee Ozmint was pleased to see the offense pick up the defense in the Scottsboro win. An Arab turnover prompted Scottsboro’s first score, but the Wildcats did drive 76 yards on nine plays for it. Bruising running back Keenan Alvarez ran 17 yards for the TD with 3:32 left in the opening quarter.

“Our offense was our best defense tonight,” Ozmint said. “Our defense wasn’t terrible, but Scottsboro had a good game plan against us and moved the ball.

“Our offense ate up a bunch of minutes.”

Drake Franklin did a lot of that damage. He ran 26 times for 128 yards and two touchdowns.

But it was Cox and his receivers who came up big. Tied 7-7 with 6:13 left before halftime, Arab faced a first-and-10 at its own 4 after Hayden O’Reilly intercepted a Scottsboro pass.

Several Franklin runs got Arab out of the hole, then Cox found McCain four times to put Arab in scoring position. One of the biggest was an 18-yard pitch and catch on third-and-12 that gave Arab a critical first down at the Scottsboro 41 with under 1:49 left in the half.

Cox then hit McCain with a 12-yard pass to the Scottsboro 2 on fourth-and-9 with 8.7 seconds left before halftime. On the next play, Cox found McCain again for the fifth time in the drive for a score with 4.4 seconds left in the half.

“He’s a great teammate and a great talent,” McCain said of Cox. “He just makes plays.”

The 96-yard drive on 17 plays put Arab ahead at halftime 14-7. Some forward-thinking fans thought it might be one of the biggest touchdowns for Arab in some time.

“I don’t know about that,” Ozmint said, “but it was big for this team tonight.”

Ozmint was pleased to see the offense step up. It showed that Arab is not a one-dimensional team.

“The defense has been carrying the load for us,” Ozmint said. “Tonight, the defense was struggling a little. It didn’t play terrible, but their offense ate up a bunch of yards (200 total yards to Arab’s 357).

“But hat’s off to this football team (Arab). The sign of a good team is when somebody struggles, somebody else picks them up.

“And our defense definitely improved (in the second half).”

Defensively, Will Caneer had another big game, with nine solo stops and one sack. Josh Roe had seven solo tackles and Logan Silva had six.

John Ray Wilks and Dylan Morrow had three solo stops each. Wilks also had an assist. In addition to his interception, O’Reilly had two solo stops and one assist.

Hagen Stewart also had two solo tackles and one assist.

Scottsboro’s Alvarez had 76 yards on 13 rushing attempts and caught one pass for 15 yards.