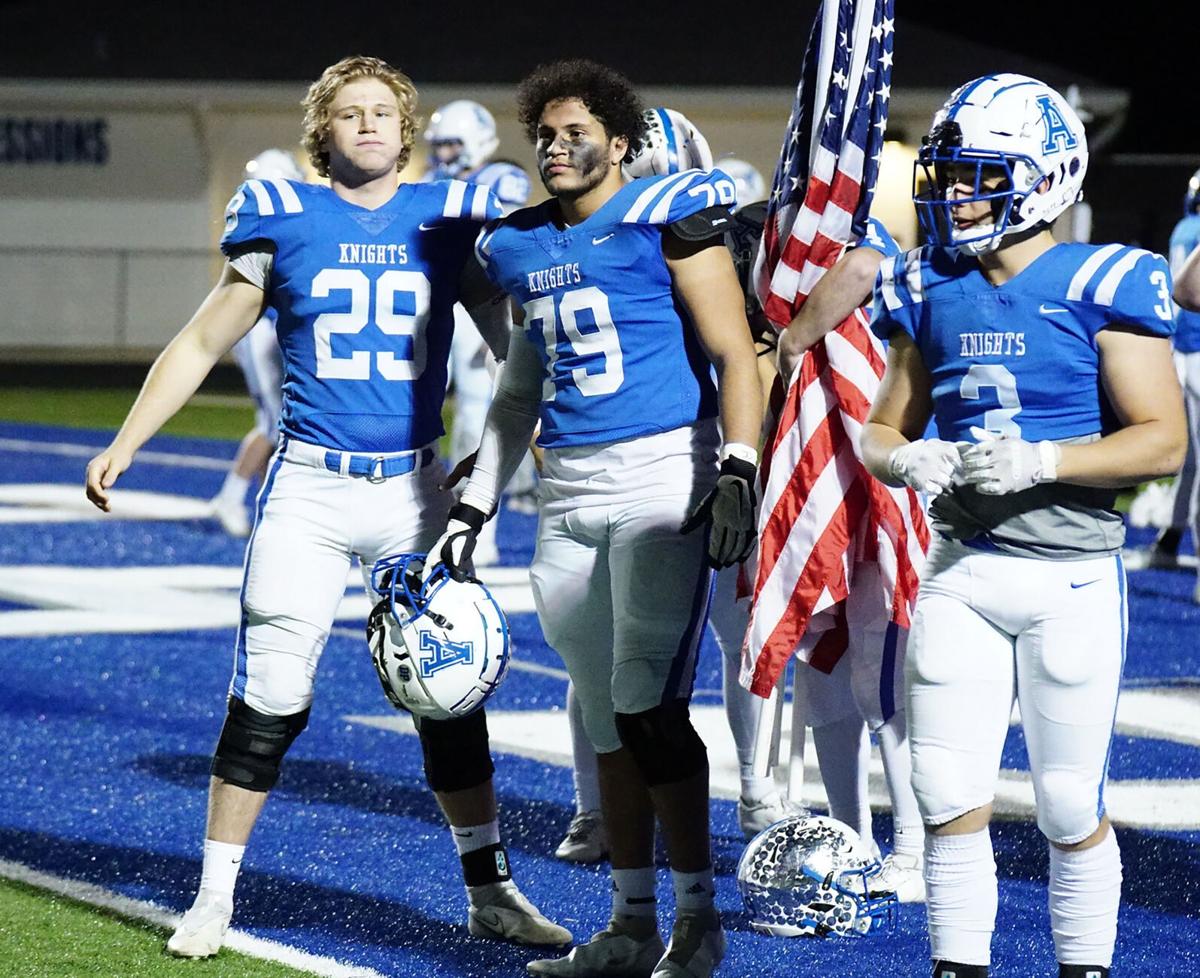 The Knights – including Caleb Roe (29), Moe Al-Khawlani (79) and Drake Franklin – get ready to come onto the field Friday after the coin tosss. 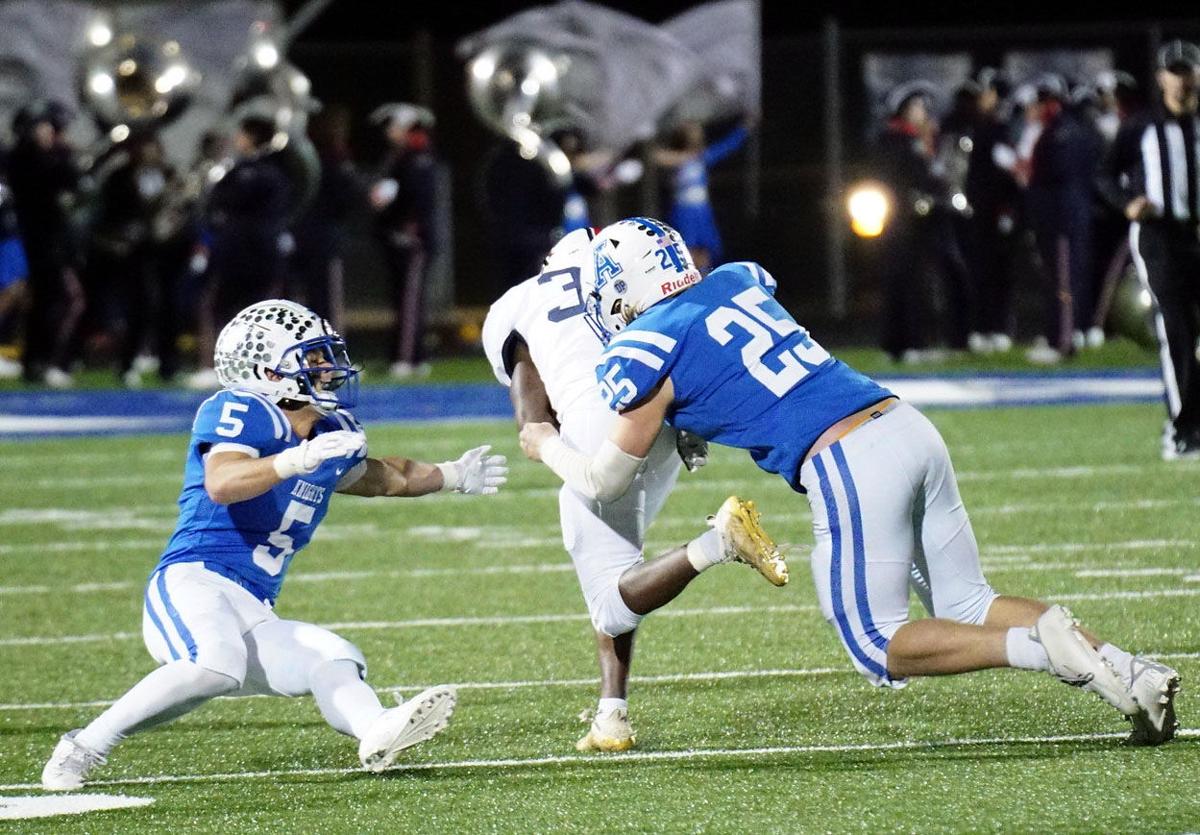 Mitchell Duquette, who led the Knights with six solo tackles, brings down Homewood’s Calyb Colbert (33) as Jackson Martin comes in to assist.

The Knights – including Caleb Roe (29), Moe Al-Khawlani (79) and Drake Franklin – get ready to come onto the field Friday after the coin tosss.

Mitchell Duquette, who led the Knights with six solo tackles, brings down Homewood’s Calyb Colbert (33) as Jackson Martin comes in to assist.

There were tears on the faces of many Arab seniors. There was a look of sheer disappointment on the face of head coach Lee Ozmint.

And there were lots of hugs, especially for those whose high school football playing days are finished.

Such was the scene on the field as Arab players and coaches graciously congratulated the visitors from Homewood after they beat the Knights decisively, 42-14, in a first-round 6A playoff game last Friday at the Sportsplex.

Arab tied it up at 7-7 on a 15-yard TD pass from James Ed Johnson to John Wesson Johnson with 5:54 left in the opening quarter. But it was all Homewood after that as the Patriots earned a second-round game Friday against Gardendale, a surprise 35-28 winner over No. 2 and previously unbeaten Hartselle.

Homewood’s domination against Arab wasn’t of the explosive variety. It was steady and relentless, as the Knights for most of the game had no answers for the Patriots either offensively or defensively.

“We played probably our worst game of the season at the worst time,” a clearly disappointed Ozmint said. “We just never settled down.

“We practiced with much more sense of urgency than we played. We didn’t play anywhere near to our potential tonight and that’s my fault.”

Ozmint was grasping for answers in the immediate aftermath of the game, suggesting perhaps the moment was “too big” for his team. But he had nothing but praise for his seniors, most of whom have been in the program during Ozmint’s three years here.

“I’m so proud of these seniors,” he said. “They’ve done some things that have not been done around here for some time.”

A big part of Ozmint’s disappointment in the game was watching the players, especially the seniors, go out in a way not worthy of this team. Beginning in the fourth quarter, Arab coaches began consoling many of the players and encouraging them for their effort.

This loss won’t define this team or its senior class.

“All but one team in 6A will end their season with a loss,” Ozmint said. “When the hurt’s over and they’re able to look back on the season, they’ll see a lot of good.

“One thing I look at is, are they are better men then when they started. And they are.”

Mondrel Odell ran for 141 yards and two touchdowns on 21 carries and Calyb Colbert also ran for two TDs as Homewood (6-5) stopped a four-game skid against Arab (8-3).

Quarterback Woods Ray was 12-of-15 passing for 123 yards and one touchdown, with several of his passes landing in the hands of his older brother, Harvey, who had six receptions for 70 yards and the touchdown. Harvey’s 5-yard reception from Woods early in the third quarter was the backbreaker for Arab as it gave the Patriots a 28-7 lead.

Arab scored late on a Hayden O’Reilly 4-yard run, capping a drive directed by junior backup quarterback Aidan Cox as the Knights showcased a glimpse at next year’s team.

O’Reilly, also a junior, had his second good rushing performance in a row, stepping up for the injured Drake Franklin, who also is a junior. O’Reilly ran for 136 yards on 18 carries against Homewood.

Wes Johnson had three catches for 28 yards. Brody McCain had two catches for 18 yards and Dakota Smith had one reception for 16 yards.

Mitchell Duquette had six solo stops and five assists to lead the Knights’ defense. Caleb Roe had four solos, including one tackle for loss, and three assists.

Josh Roe had two solos and six assists, while Jonah Humphreys, playing with a leg injury, had four solo stops and two assists. Wes Johnson and Patrick Lawler each made three tackles and one assist, while John Ray Wilks had three solo tackles.

Jonathan Pugh had two tackles, including one for a loss, and one assist.