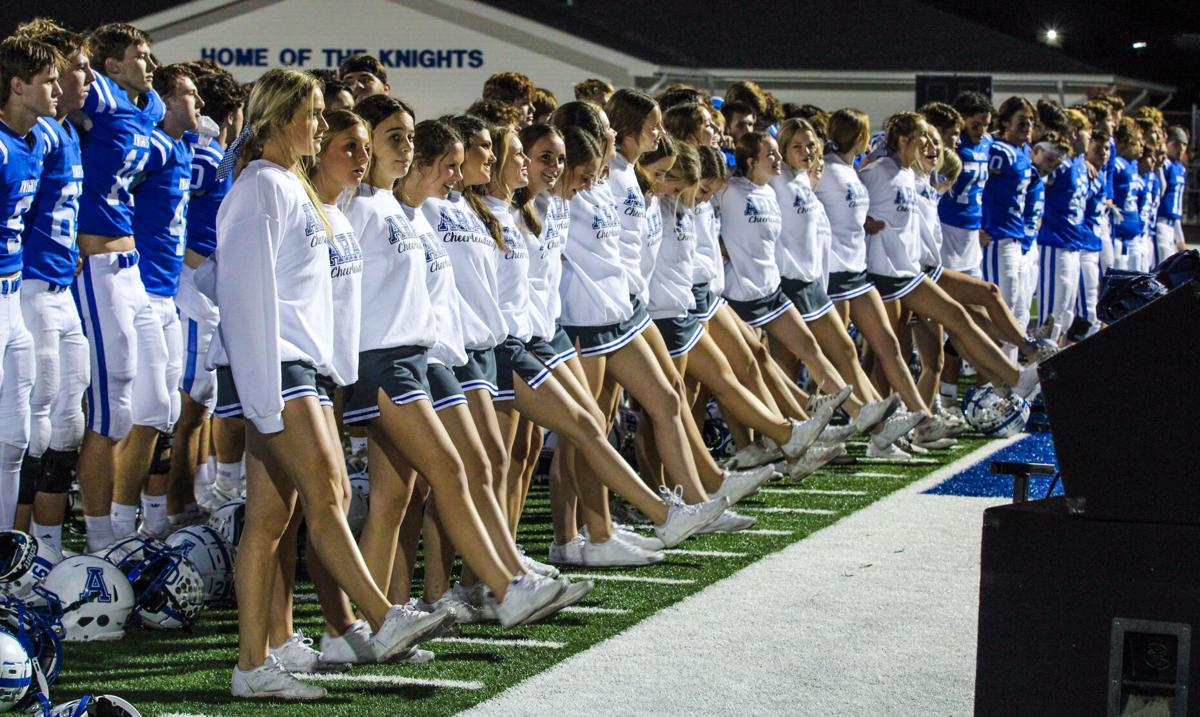 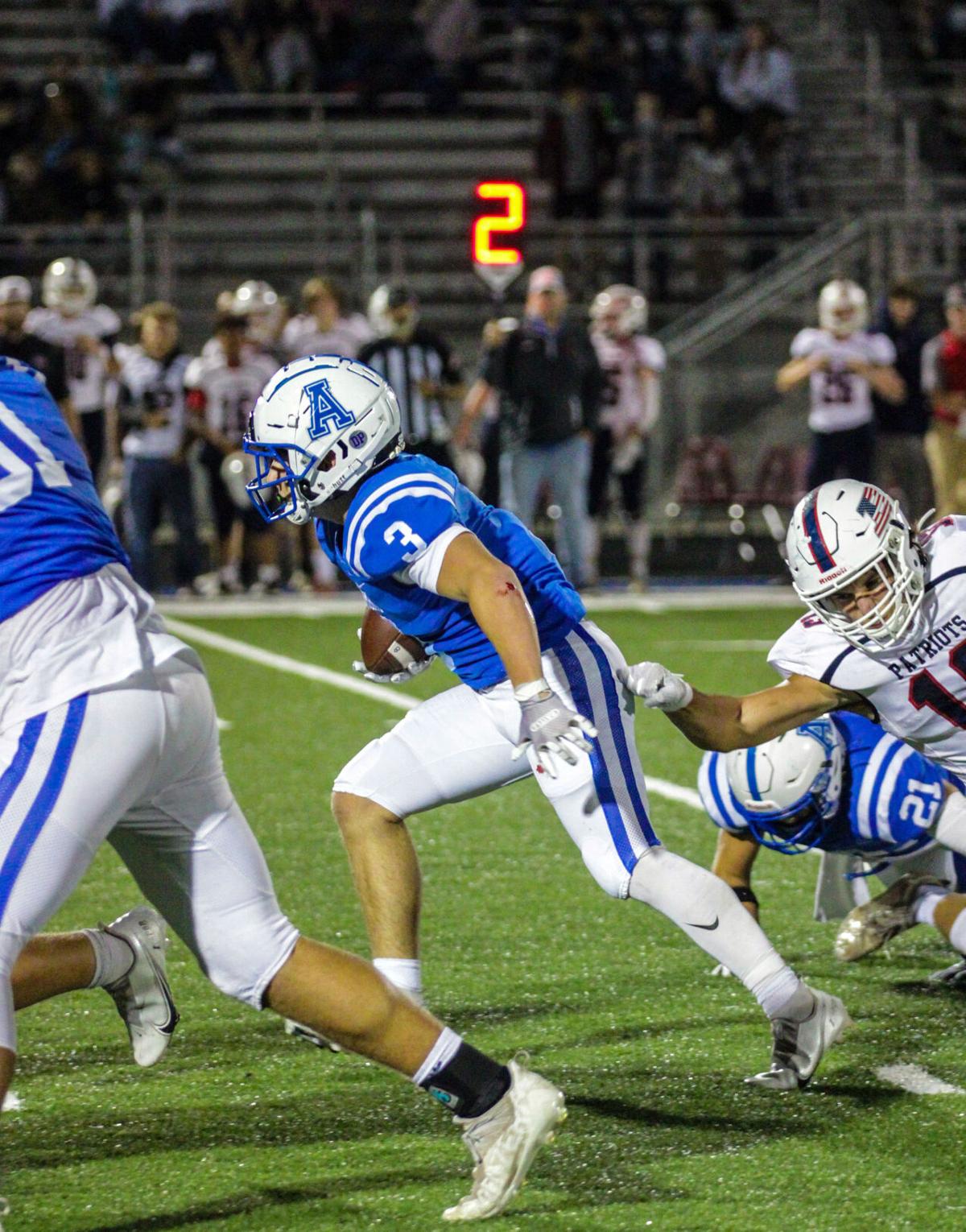 Arab's Drake Franklin tries to break free from a Brewer defender. He did so for much of the night, gaining 94 yards on the ground.

Arab's Drake Franklin tries to break free from a Brewer defender. He did so for much of the night, gaining 94 yards on the ground.

It was just what everybody needed on Arab’s side. Scoring just 13 seconds into the game, the Knights took a commanding 35-0 lead before halftime and coasted to the kind of Homecoming win every coach, player and fan dreams of, finally putting down local rival Brewer 49-13 last Friday night.

Arab led 49-0 at the end of the third quarter. The Homecoming queen had been crowned and the Arab bench had been emptied by that time. A lot of players and parents went home smiling.

Even coach Lee Ozmint struggled to find anything to nit-pick.

“We played hard. We made some mistakes, but sometimes it’s easy to make mistakes when you’re up by 49 points,” he said.

But he knows the path ahead won’t be this easy. The win over winless Brewer made the Knights 5-1 overall, almost assuring them of a winning season. But that’s not the focus – or the goal – right now.

The Knights are 3-0 in 6A, Region 7 and face three straight region opponents, all at home, with an off week between Oxford (Oct. 8) and Springville (Oct. 22). Tomorrow, it’s Pell City, which plays at Arab because it had to forfeit last year.

A region championship is in Arab’s sights, and that would be a true landmark achievement for a program that hasn’t won one since 1993 (6A, Region 14) under coach Larry “Pod” Patterson.

Ozmint isn’t even thinking that far ahead.

“We’ve got a lot of work to do,” he said after the Brewer win. “But, we’re getting better and better.”

Arab senior quarterback James Ed Johnson was 7-for-7 passing for 92 yards and two touchdowns – all in the first half – against Brewer. He had second-quarter TD passes of 21 yards to Dakota Nesmith and 31 yards to Brody McCain before retiring for the night late in the first half. He also rushed three times for 51 yards, including 26 yards for a first-quarter score.

“We just came out and took care of business,” Johnson said. “All the work we did over the summer and in the weight room is paying off.”

Running back Drake Franklin ran it 10 times for 94 yards and had TD runs of 7 and 13 yards. Backup QB Aidan Cox led the Knights on three scoring drives, including one just before half. He passed 33 yards to McCain for one TD and ran 20 yards for another score.

The first score – Franklin’s 7-yard run – came after Dylan Morrow recovered a fumble on the Brewer 7 on the opening kickoff.

Just before half, Cox replaced Ed Johnson and led the Knights on a two-play, 80-yard drive that featured a Cox run of 32 yards, a Brewer 15-yard penalty, then a pass to McCain that covered 33 yards. The drive took 30 seconds.

“Cox played almost the entire second half and played well, I thought,” Ozmint said. “Drake Franklin had a good day running the football.

“We didn’t have a JV game (the previous Monday) and a lot of young guys got some reps. I was real proud of how they played.”

Brewer (0-6) scored its first points on the first play of the fourth quarter on a 15-yard TD pass by Caden Childers, who was 29-for-45 for 263 yards with two interceptions. Childers also rushed nine times for 53 yards.

Gonzalo Ramirez, who had five rushes for 17 yards, had an 8-yard scoring run with 9:15 left in the game.

DJ Burney had 13 catches for 113 yards, and Walker Latham had 11 receptions for 79 yards. Burney is a sophomore and Latham is a freshman for head coach Matt Plunkett’s young Patriots, who hung in there against “obviously a really, really good team” in Arab, he said.

“I was really proud of our effort,” Plunkett said. “Our O-Line was non-existent against them and we somehow found a way to move the ball.

“Arab’s a really good team and we hung in there and competed with them. I’m really proud of them for that.

“We made a lot of mistakes, but we’ve got a lot to work with.”