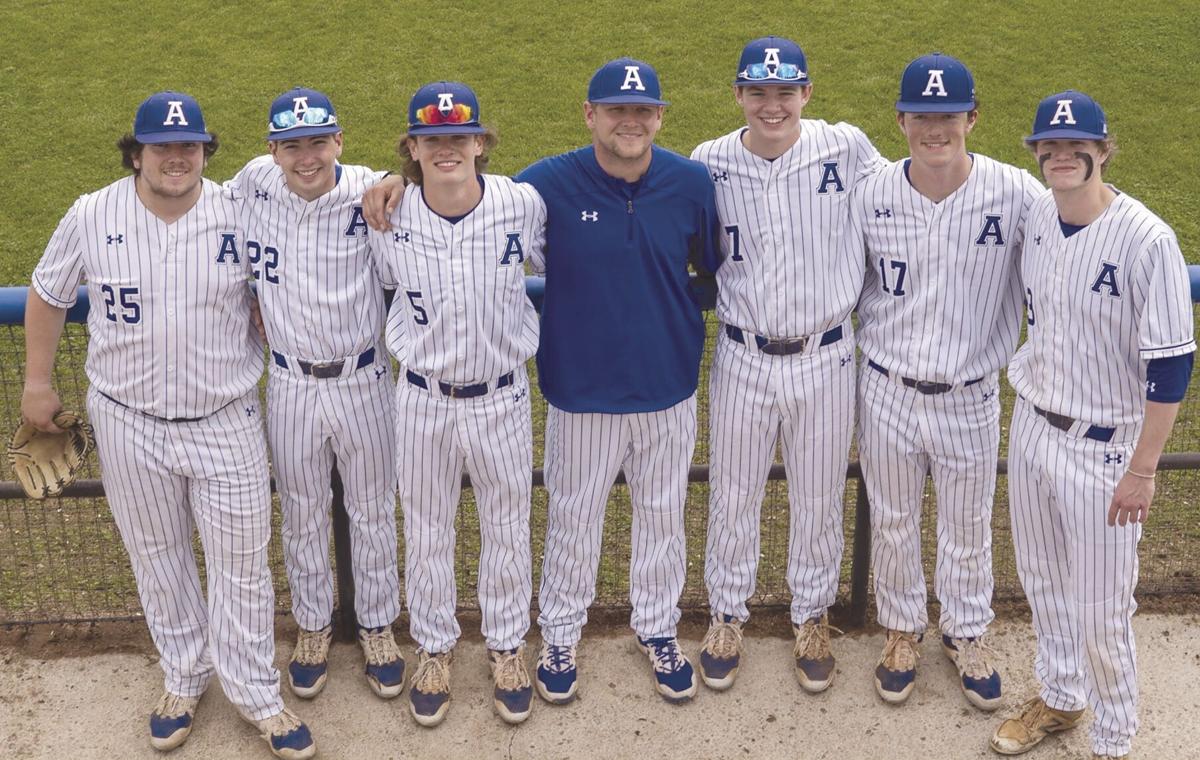 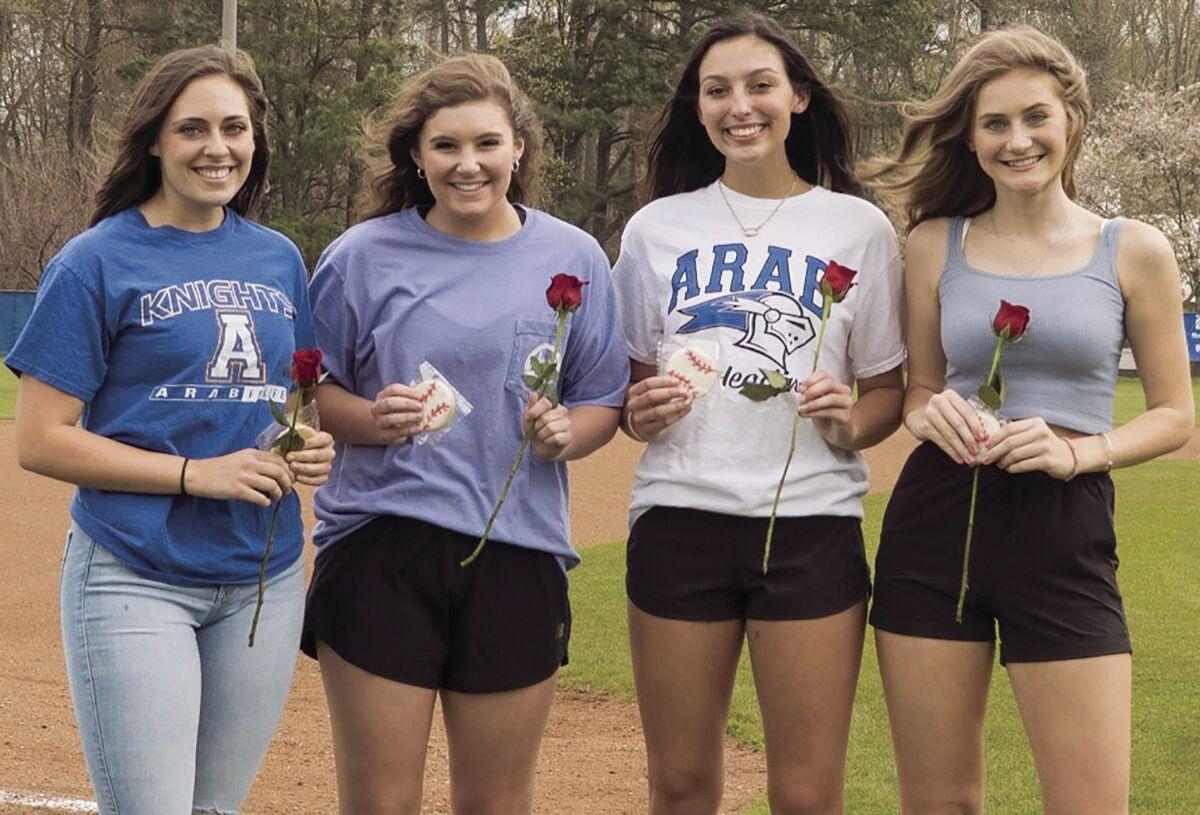 After losing an Area 15 tiebreaker game at home in disappointing fashion on Friday, the Arab baseball team picked a great time to play one of its best games of the season Saturday against Priceville.

Saturday was “Senior Day,” and the Knights came out and defeated Priceville 8-2 in what coach Chad Hudson said “was one of our most complete games this season.”

“We didn’t swing the bats as well as we could have but we were patient and took some walks and had some timely hits,” Hudson said. “The best thing we did was play defense. We played with confidence and really made some nice plays.”

Hudson was gratified that his six seniors shined on their special day. Senior players and their parents were recognized, as were the senior Diamond Dolls.

“I was so happy to see our seniors have a great Senior Day – they all played well and it was great for them to get a win on Senior Day,” he said. “This group of seniors is really easy to pull for. They are good leaders and have high character.

“They made sure that we would be ready to go Saturday after the tough loss in Game 3 (of the Scottsboro series) Friday night. It is a privilege to get to coach this group.”

The big story of the day, according to Hudson, was the performance of one of those seniors, pitcher Bradley Ridgeway. He went five innings, allowed one earned run on one hit and struck out two to pick up the win.

“Bradley has pitched well for us this year, but this was by far his best performance – and we really needed it,” Hudson said. “We used a ton of pitching in the area games against Scottsboro, so we needed Bradley to step up and he really did.

“He worked to contact and we played good defense behind him. I was really happy for Bradley to have such a great game on Senior Day.”

Owen Garrison pitched two innings of relief, allowing one run on one hit while striking out one.

Dakota NeSmith had a two-run homer, Law had a double and Bradshaw had an RBI single. Also, Ridgeway had an RBI on a suicide squeeze.

The Saturday win – the JV team also won, 5-4 – and all the festivities provided great comfort for a team coming off an emotional week that culminated with a rollercoaster ride on Friday. The Knights bounced back from a devastating 4-3 loss at Scottsboro on Tuesday to play a complete game in a 9-3 win over the Wildcats at home Friday, setting up a series tiebreaker.

The winner of the tiebreaker has the advantage over the other team in the area standings, though the game doesn’t actually count in the area won-loss record.

That’s good for Arab because the Knights fell flat in the series’ third game, losing 10-0.

“Our area record is 1-1,” Hudson explained. “If we finish tied in the standings with Scottsboro, they will be above us.”

To put it another way, had Scottsboro won Friday’s first game, there wouldn’t even have been a tiebreaker game.

In that first game, the winning pitcher was McBride, who went five innings and allowed six hits and three earned runs. He struck out five and didn’t walk a batter.

“It was just a huge bounce-back win,” Hudson said of Friday’s first game. “We had a chance to go to Scottsboro and come out of there with a win Tuesday night and we couldn’t finish it off.

“It was great to see us fight back and play a complete game Friday. Gavin pitched really well against a good lineup – he pounded the zone and was locked in. Hayden did a great job of coming in and finishing it off.”

The good feeling was short-lived. Arab could muster only three hits in the 10-0 loss – all singles, from Turner, NeSmith and Brody McCain.

“Scottsboro has excellent pitching depth and it showed in the series,” Hudson said. “Their starter kept us off-balance all game. They hit the three-run home run in the first and we never really recovered.

“We had a hard time throwing strikes. We walked eight and hit two more, so we will always struggle to win games when that happens. We used five different pitchers and just couldn’t find any answers.

“We have a few injuries on our pitching staff and it left us a little exposed in the third game of the series. It was a big deal to get the area win in the first game. Hopefully, the tiebreaker game won’t come in to play in the end.”

Arab began play Monday in the Albertville Tournament, kicking off an important stretch of the season, according to Hudson.

“This week will be the most challenging week we will have as far as the schedule goes,” he said. “We play six games and face some big-time programs like Southside, Russellville, Hazel Green and Buckhorn.

“That is a great way for us to get ready for our last area series versus Fort Payne. This week should prepare us for that series for sure.”

On Monday, Arab led 1-0 early but gave up two unearned runs in the third to fall behind 2-1.

Southside had five hits in the fourth inning to take a 6-1 lead.

Tyler Benson had a bases-loaded double in the sixth inning and John Wesson Johnson had a sac fly to pull the Knights within 6-4, but Southside got four more hits in the bottom of the sixth to put it away.

McCain and Turner were each 2-for-3 in the game. Jackson took the loss on the mound and Aidan Cox pitched 2.1 innings in relief.

“We had a great shot at a big inning in the top of the first with the bases loaded and no outs but we only scored one,” Hudson said. “They threw their ace so we needed to take advantage of that spot.

“We made a few errors early that got Sam’s pitch count up and gave them a chance to take the lead back. In the fourth and sixth, Southside just barreled up balls left and right.

“I was proud of the rally in the sixth to get back in it. Tyler Benson had a huge hit. Brody McCain and Hayden Turner played well – they are both locked in pretty good right now.”

On Tuesday, the Knights could muster only three hits: singles by Law and Jackson and a double by NeSmith.

“No question our worst offensive performance of the season,” a disappointed Hudson said. “We didn’t compete in the box, we struck out 10 times.

“I was disappointed, but it happens in baseball. Hopefully we will practice well Wednesday and bounce back Thursday because we play two very good teams Thursday.”

The Knights (12-12) are scheduled to play two more games in the Albertville Tournament today: Hazel Green at 4 p.m., followed by a game against Buckhorn at 6.

Then on Saturday, Arab travels to Russellville to play the Golden Tigers at 11:30 a.m. and Alcorn Central (Miss.) at 2 p.m.