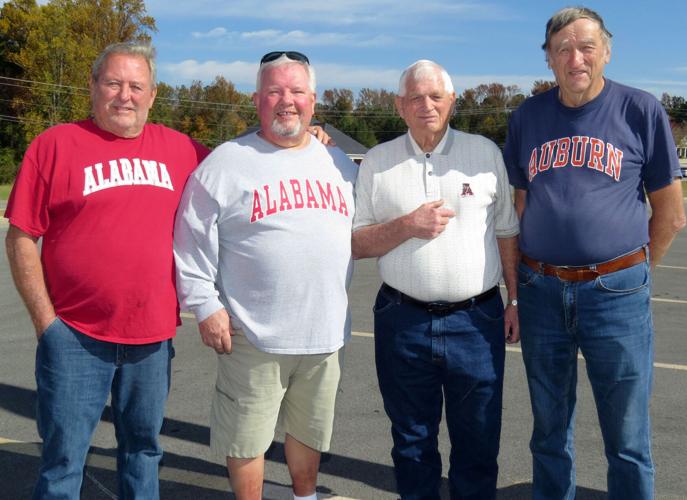 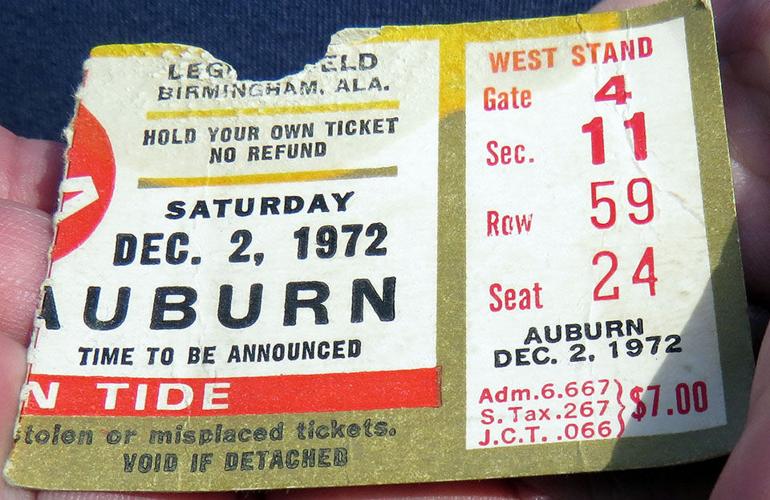 George Stone picked up this ticket stub for the 1972 Iron Bowl since he paid cash to get in. Note the price!

George Stone picked up this ticket stub for the 1972 Iron Bowl since he paid cash to get in. Note the price!

George Stone’s first Alabama-Auburn game was memorable for more reasons than the obvious.

It was the 1972 Iron Bowl, ever since known as the “Punt Bama Punt” game. Played on Dec. 2 at Birmingham’s Legion Field, the game belonged to heavily favored and second-ranked Alabama until 10 minutes left.

Then, as anyone in the state of Alabama who was alive in 1972 will remember, Auburn scored 17 points in the final 10 minutes to pull out a 17-16 win as double-digit underdogs. The last two touchdowns came on blocked punts: Bill Newton blocked them, and David Langer ran them into the end zone.

For Stone, even than a huge Auburn fan, the game itself was quite the thrill. But what happened before the game made the day all the more memorable. Stone and a group of friends from the Union Chapel community in Union Grove, took off that Saturday morning for Birmingham without tickets to the game.

The group included Stone, Danny Ballew and Russ Gregory. Gary Wallace, also of Union Grove, drove down separately but joined the others at a nearby motel before they departed for the game..

It was the first Iron Bowl for everyone except Wallace.

The game was a hard sell-out because it was not televised, likely because the battle of unbeatens the year before turned out to be a 31-7 Bama rout.

So, tickets to the 1972 game were hard to find. Bama was 10-0. Auburn was 9-1 and ranked in the top 10. If the rest of the country wasn’t as interested in this Iron Bowl, fans in the state of Alabama certainly were.

So, there the group from Union Grove stood there at Legion Field. They were unable to buy tickets, or more likely unwilling to pay the exorbitant prices scalpers were asking.

The guys eyed a deputy sheriff standing at the student section. Wallace, being the oldest, went up to the deputy and asked him how much would it take to let the four in the game.

Next thing you know, the deputy was telling them, “Follow me.”

As they walked behind him, into the stadium, the deputy turned to them and said, “Here you are, now scatter!”

“I was scared to death,” said Ballew. “Here I was a country boy in the big city.”

The deputy “probably more than doubled his salary that day,” Stone said.

Stone, the only Auburn fan in the group, enjoyed the game the most, but it was exciting for everyone to say the least.

Stone picked up a ticket stub that he’s kept all these years. As he attends his 51st Iron Saturday in Tuscaloosa, he’ll have stubs for every Alabama-Auburn game but one: the 2020 Iron Bowl, when he entered using a bar code on someone else’s cell phone.

While it was Stone’s first Iron Bowl, it wasn’t his first college game to attend in person. In 1967, he went to the 1967 Bama opener, also at Legion Field, when the Tide played Florida State to a 37-37 tie.

Ironically, the group never again attended an Iron Bowl together again, though most of them went together to the Gator Bowl after the 1972 Iron Bowl. Russ and his brother, Larry (Sam) Gregory, went along with Ballew and Stone.

Auburn’s 1972 team, ultimately nicknamed “The Amazin’s” for what they accomplished in a rebuilding year under Ralph “Shug” Jordan, went on to defeat Colorado in the Gator Bowl 24-3 as backup quarterback Wade Whatley won Offensive MVP honors. Starter Randy Walls suffered a torn ACL in his right knee in practice for the bowl game.

Alabama went on to lose the Cotton Bowl to Texas to finish 10-2.

Sorry, there are no recent results for popular articles.

Sorry, there are no recent results for popular images.