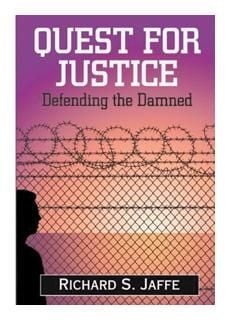 Oct. 8, 1997 Tribune announces Padgett's not guilty verdict, above; Quest for Justice cover, below 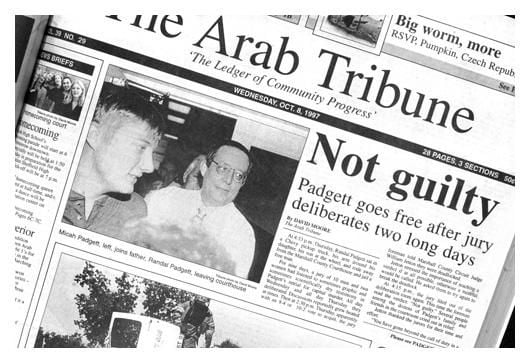 Oct. 8, 1997 Tribune announces Padgett's not guilty verdict, above; Quest for Justice cover, below

Richard Jaffe was the lead defense attorney in one of the most controversial cases to ever be tried in Marshall County. He defended Randal Padgett, who had been previously convicted of murdering his estranged wife in August 1990 in their home in Grassy.

It is one of the cases that Jaffe details in his new book, "Quest for Justice - Defending the Damned."

Jaffe said he wrote the book hoping people would rethink the death penalty.

"It doesn't work," he said. "We have the 'Green Acres' killer who confessed to killing at least 48 people. People like Jeffery Dahmer and Ted Kyzinski - the worst of the worst - for whatever reason, they didn't get the death penalty. But you have someone who committed one horrible act and they end up on death row."

In the book, Jaffe tells of defending many people, including Atlanta Olympic bomber Eric Robert Rudolph and others.

The death penalty was ruled unconstitutional in the early 1970s, but was brought back later in the decade.

"The reason it came back is the Supreme Court thought new sentencing procedures would make applying the death penalty more predictable - make it where the worst of the worst - would get the death penalty and others would get life without parole," Jaffe said. "But it hasn't happened that way.

"And death penalty cases are extremely expensive - and there is no way to fix that. Some states have spent millions of dollars to put people on death row."

As it is, 33 states, including Alabama, still have the death penalty.

"Eventually, I think, that between the expense of the death penalty and that we know 138 people have been exonerated that were on death row - the Supreme Court will ultimately strike it down. We do not know how many innocent people have been executed."

It won't be done away with by the Alabama Legislature, Jaffe said, because it's an extremely conservative state.

It will take the Supreme Court to strike it down.

"I really think that if people read the book, it might not necessarily change their minds about the death penalty, but I think it will make them think about it and ask questions."

Jaffe still has contact from time to time with Padgett, who has since remarried but still lives in the Arab area.

Cathy Padgett was found by her children stabbed to death in August 1990. She also had been raped, police said. DNA testing confirmed that semen found was Randal Padgett's.

In April 1992, he was found guilty after the jury deliberated for about three hours. The jury recommended life in prison without parole, but then-Marshall County Circuit Judge William Jetton sentenced Padgett to death.

He spent three years on Alabama's death row until the Alabama Court of Criminal Appeals ruled that Jetton had erred in his charge to the jury and that the district attorney's office failed to turn over evidence to Padgett's defense attorneys in a timely manner. The court granted Padgett a new trial.

Later that week, Padgett's brothers and sister sat in Jaffe's office trying to hire him to represent Randal in the second trial. It was a five-hour meeting in which he listened to them and thumbed through the transcript of the first trial.

Jaffe decided to take the case, but something in the transcript bothered him.

"Not only did Judge Jetton sentence Randal to death, but he also stated on the record when doing so that he had his own reasons for believing that Randal killed Cathy and therefore deserved death," Jaffe wrote.

He knew that if Padgett was convicted again, Jetton would sentence him again to death. He had to decide whether to ask Jetton to recuse himself from the second trial.

"But when I completed my reading of the transcript, I became absolutely convinced that Judge Jetton embodied every quality one could ever desire from a great judge… Most of all, he aimed to be fair."

The second trial began in September 1997.

"The head of the Alabama Polygraphers Association, who was a law enforcement guy all the way through, said Randal passed the polygraph with flying colors," Jaffe said in the interview. "And usually in these type cases you find that the accused has something in their background that gives you an inkling that he could have done it. Randal didn't have that background, other than an affair he had. But that doesn't make you kill your wife and allow your children to find her body. You would have to be especially evil to do that."

Cathy Padgett had 46 stab wounds. Most were defensive, which suggests a struggle.

"Randal was a big man," Jaffe said. "He wouldn't have needed 46 stabs to kill her. If it was Randal, there would have been no struggle."

Jaffe said he knows prosecutors and law enforcement in Marshall County still think Padgett is guilty and he doesn't think that will ever change.

Bill Stricklend is one of them. The Marshall County District 1 Commissioner was lead investigator on the case.

"There is no doubt in my mind that we arrested the right man in that case," Stricklend said Thursday. "It my opinion it was a travesty of justice that he wasn't convicted in the second trial. And I think most all law enforcement who were involved in the case feel that way, too."

While much has been written in local papers about the trial, "Quest for Justice" is the first time the Padgett story has been told from Jaffe's perspective.

"A lot of people think that defense lawyers are part of the problem," he said. "But we aren't. We are officers of the court just like prosecutors are. We swear to an oath just like the prosecutors do.

"People get tired of hearing everyone say they aren't guilty," he continued. "I understand that, but we have to get people back to the thought that those charged really are innocent until proven guilty."

Jurors say they can be impartial, but society is so hardened that rarely does a juror not have a preconceived notion at the beginning of a trial, he said.

"They think where there is smoke there is fire," Jaffe said. "They think that there must be something to the defendant being guilty because he's been arrested and he's on trial. We have to change that mentality."

He worried that the jury in the second Padgett trial would be that way. But they weren't, he said. They paid attention and they deliberated for three days. The first jury took about three hours to convict Padgett.

On the third day of deliberations, Jetton was ready to declare a mistrial.

"'Please, Judge,' I begged. 'Just ask them if they think they can reach a verdict.' Solemnly the judge took the bench, looked over at the jury and addressed it," Jaffe wrote.

Jetton told jurors they had worked long and hard and he commended each one of them for their efforts.

"'But after two-and-a-half days, I feel I have no choice but to…'" Jaffe quoted Jetton in the book. "The judge glanced my way and our eyes locked for an instant. He turned back to the jury. 'Ladies and gentlemen, is there any one of you who feels that more deliberation would be fruitful?'

"To my absolute incredulity and relief, two jurors answered affirmatively," Jaffe continued in the book. "Judge Jetton asked them to return to the jury room to resume their deliberations."

The jury came back a few hours later and found Padgett not guilty.

"Quest for Justice" can be pre-ordered through Barnes & Noble and through www.amazon.com.